Microsoft added a new known issue to all cumulative updates that it released for Windows client and server versions in August 2019.

The issue states that applications may stop responding if they use Visual Basic 6, Visual Basic for Applications, or Visual Basic Scripting Edition. Apps may throw the error "invalid procedure call error" in that case.

Cisco XenApps appear to be affected by the issue according to a post on Born's site. 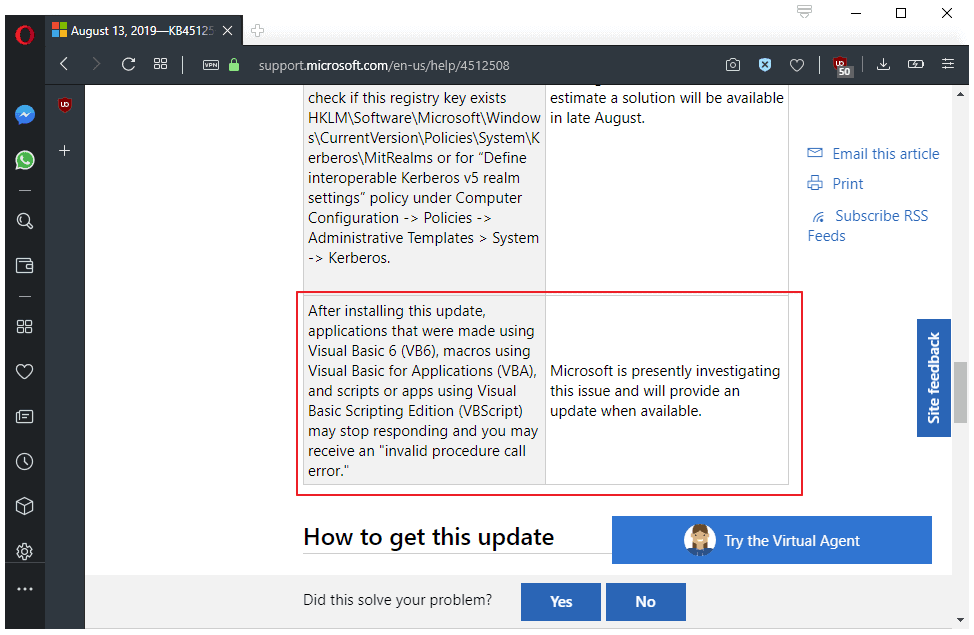 All cumulative updates that Microsoft released appear to be affected by the issue. The known issue has been added to release pages for all supported versions of Microsoft Windows:

Microsoft notes that it is investigating the issue currently and that it plans to distribute an update as soon as the issue is resolved.

Microsoft has not revealed additional information about the issue; it is likely that it is related to the announced disabling of VBScript on all versions of Windows.

Organizations -- and the bug affects organizations for the most part -- who run apps or tools that require a Visual Basic flavor may want to block the August 2019 updates until the issue is resolved. Those who have installed the patches already can uninstall the Windows Updates to resolve it.

An issue that affects all different versions of Visual Basic on all supported versions of Windows, that is a major one. Microsoft really needs to rethink testing and evaluating of updates to avoid major breakage like this from happening especially if it concerns in-house products like Visual Basic.

Now you: what is your take on this issue?

Martin Brinkmann is a journalist from Germany who founded Ghacks Technology News Back in 2005. He is passionate about all things tech and knows the Internet and computers like the back of his hand. You can follow Martin on Facebook or Twitter
View all posts by Martin Brinkmann →
Previous Post: « If you get Windows Update error 0x80092004 on Windows 7 or Server 2008 R2 do this
Next Post: First updates released that fix the Windows VB bugs »