Firefox 68.0.1 will be released today

Mozilla plans to release a minor update for the stable version of the organization's Firefox web browser that brings the version to 68.0.1 on July 18, 2019. Note that there will also be a Firefox ESR update to 68.01 ESR.

Firefox 68.0.1 is a bug fix release for the most part but it does introduce new functionality for Firefox on Mac systems specifically. Mozilla released Firefox 68.0 on July 9, 2019. 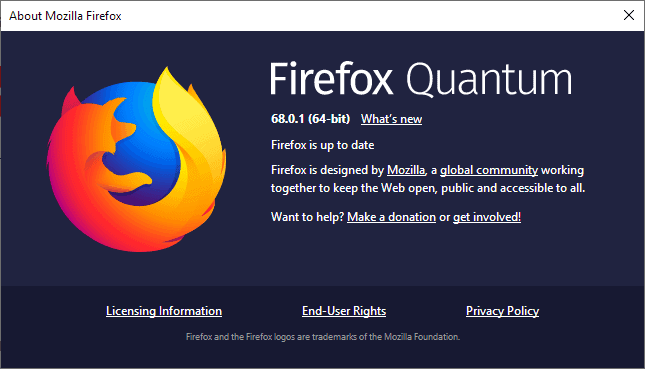 Firefox 68.0.1 features four additional changes that apply to all desktop versions of the web browser:

Please note that these are preliminary release notes. It is certainly possible that additional issues get fixed in the final Firefox 68.0.1 release or that some issues won't be fixed if last minute bugs are discovered.

The official release notes are not up yet; you can check them here once Firefox 68.0.1 has been released to find out if there have been any last minute changes not mentioned in this article.

Article Name
Firefox 68.0.1 will be released today
Description
Mozilla plans to release a minor update for the stable version of the organization's Firefox web browser that brings the version to 68.0.1 on July 18, 2019.
Author
Martin Brinkmann
Publisher
Ghacks Technology News
Logo