Next up for Firefox's Tracking Protection: Social Media tracker blocking

Mozilla plans to extend the functionality of Firefox's Tracking Protection feature soon by adding Social Media tracker blocking to the list of protections.

Social Media tracker blocking is not an entirely new feature but Mozilla wants to move it into its own Tracking Protection category and improve it at the same time.

Tracking Protection is a built-in feature of the Firefox web browser that has been designed specifically to mitigate tracking on the Internet. Mozilla enabled Tracking Protection by default for all instances just recently in stable versions of Firefox; the feature was enabled in private browsing windows previously only.

The organization announced in mid 2018 that it had plans to push Tracking Protection, and that is exactly what it has been doing since.

The next upgrade addresses another major source of tracking on today's Internet: social media tracking. Mozilla plans to introduce the feature in Firefox 70 Stable but the release may be postponed depending on how development progresses or even pulled. Firefox 70 Stable is scheduled for a October 23, 2019 release. 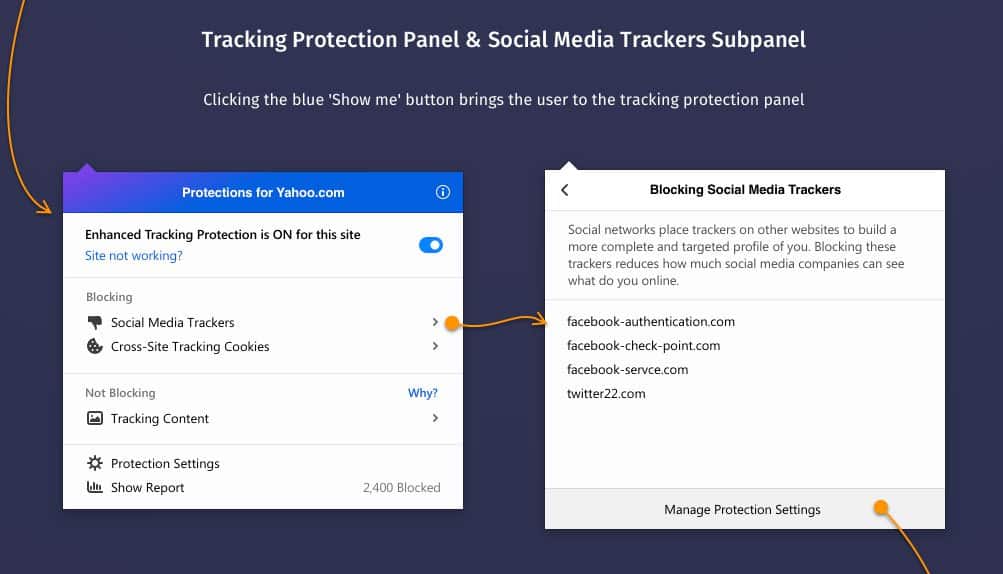 Mozilla plans to block social media trackers by default in Firefox once the feature lands. Tracking Protection supports the three different states Standard, Strict and Custom; standard is the default state and social media tracker blocking is enabled in that state.

Mozilla plans to make use of doorhangers in the future to inform users about tracking protection features.

Tracking Protection is a core feature of the Firefox web browser that has been improved significantly in the past 12 months to block more trackers but also other unwanted content such as cryptomining or fingerprinting.

There is certainly room for improvement, either by improving existing protections, e.g. fingerprinting, or by implementing new tracking protection groups.

Now You: What is your take on Tracking Protection? (via Bleeping Computer)

Previous Post: « To Google Translate is a useful translator add-on for Firefox
Next Post: Firefox to mark all HTTP sites as Not Secure »