by Martin Brinkmann on December 10, 2018 in Internet Explorer - 23 comments

Microsoft revealed plans to switch the core of the company's Microsoft Edge web browser from its own EdgeHTML base to Chromium used by Google Chrome, Opera, Vivaldi, Brave, and other browsers.

First preview versions of the "new" Microsoft Edge browser will become available in early 2019. Microsoft launched an Insider program for Edge that anyone can sign-up for to gain access to these early builds.

The move offers advantages: Edge will support all supported versions of Windows and not just Windows 10, a version for Mac OS X and other desktop operating systems is likely, and Edge updates won't be linked to Windows updates anymore.

Some things were not clear when Microsoft made the initial announcement:

Microsoft Edge project manager Kyle Alden responded to questions about the move on Reddit. He stated that it was Microsoft's "intention to support existing Chrome extensions". Whether that means that existing extensions for Microsoft Edge won't be supported anymore by the new Edge browser is unknown. 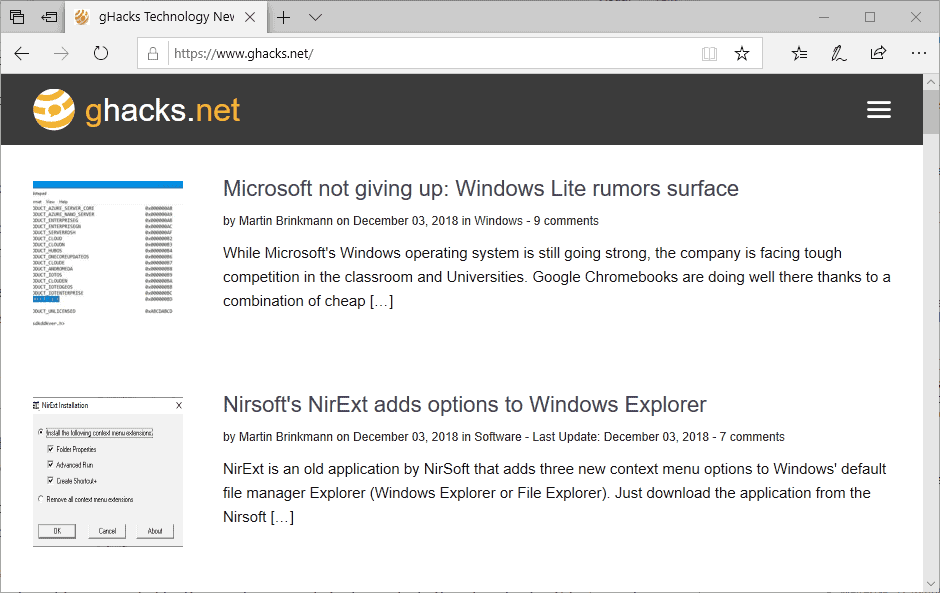 Microsoft might implement support similarly to how Opera and Vivaldi support Chrome extensions. Users of these browsers can download and install extensions from the Chrome Web Store.

Support for Chrome extensions will boost Microsoft Edge's appeal significantly. Edge users may install thousands upon thousands of extensions to customize the browser, improve privacy or security, or change content on websites. Microsoft plans to support the installation of PWAs directly from the browser as well.

Whether all of that is enough for Edge to become relevant again remains to be seen.

Martin Brinkmann is a journalist from Germany who founded Ghacks Technology News Back in 2005. He is passionate about all things tech and knows the Internet and computers like the back of his hand. You can follow Martin on Facebook or Twitter
View all posts by Martin Brinkmann →
Previous Post: « Microsoft confirms that Edge will switch to Chromium
Next Post: Internet Explorer security update KB4483187 released »