Microsoft released a security update for Internet Explorer on December 19, 2018 that patches a security issue in the scripting engine.

Microsoft describes the issue in the following way:

A remote code execution vulnerability exists in the way that the scripting engine handles objects in memory in Internet Explorer.

The issue is filed under CVE-2018-8653. The Security Advisory page for CVE-2018-8653 offers additional details. The vulnerability could be used by attackers to execute arbitrary code in the user context if exploited successfully.

If a user has administrative rights, the attacker would get these rights as well; this would allow the attacker to install and run software, and modify system settings among other things. 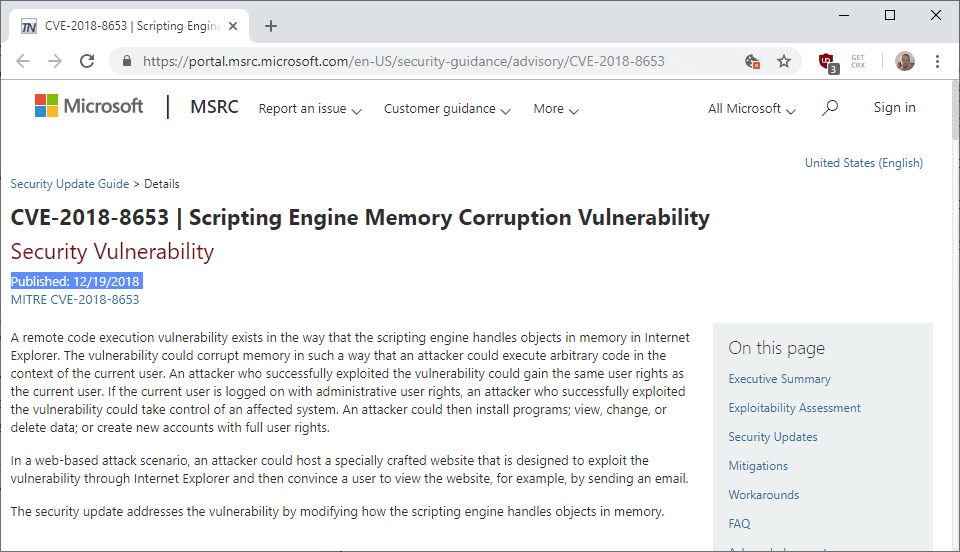 It appears, from the description, that it is enough to open a specifically prepared website in Internet Explorer to get infected.Woody thinks so, too.

The update is available as a cumulative update for Internet Explorer and Windows. Microsoft enabled the update on Windows Update already but it can also be downloaded from the Microsoft Update Catalog website.

Note that it is not recommended to run a "check for updates" on Windows Update as it may deliver updates that you don't want installed on the device; this may be a new feature update for Windows 10.

The cumulative Internet Explorer security update has a known issue that affects devices running Windows 8.1 or Windows Server 2012 R2. The "About Internet Explorer 11" dialog box shows KB4470199 from December 11, 2018 and not the new update.

Microsoft notes that users may confirm that the system is patched by checking that jscript.dll has the version 5.8.9600.19230. The file is located under C:\Windows\System32\jscript.dll

Martin Brinkmann is a journalist from Germany who founded Ghacks Technology News Back in 2005. He is passionate about all things tech and knows the Internet and computers like the back of his hand. You can follow Martin on Facebook or Twitter
View all posts by Martin Brinkmann →
Previous Post: « Microsoft Edge will support Chromium extensions
Next Post: Windows Server 2012 and Windows Embedded 8 Standard get IE11 support »