A group of administrators and users who tried to install the August or September 2018 patches on Windows 7 devices reported that the update installation would fail with error 0x8000FFFF.

The issue affected the monthly rollup updates and the security-only updates and meant that important security updates could not be installed on affected machines until the issue was resolved.

Admins and users who check the support article will notice that the error is listed as a known issue but that was not the case when the update was first released.

This update may fail to install with error 0x8000FFFF.

Before installing this update, install KB3177467, the last Servicing Stack Update for Windows 7 and Windows Server 2008 R2 SP1, to resolve this issue. 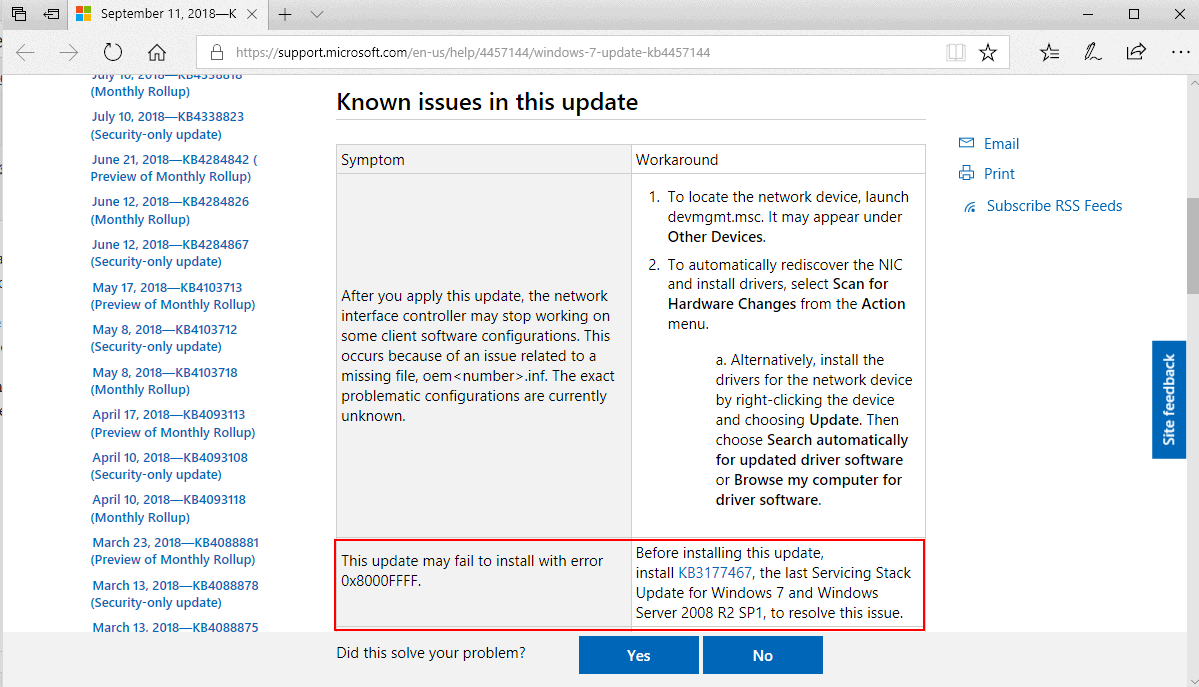 Microsoft published an article on the Windows IT Pro blog that provides details on the issue and why it was not recognized by Microsoft earlier.

The company released a Servicing Stack Update for Windows 7 Service Pack 1 in October 2016. You can look it up under KB3177467.

The update was marked critical even though it was not a security update for Windows 7. The reason that Microsoft gives for the rating is that servicing stack updates are essential for the updating process.

Servicing stack updates, or SSUs, are periodic updates released to specifically service or update the software stack for Windows platforms. These are fixes to the code that process and manage updates that need separate servicing periodically to improve the reliability of the update process, or address issue(s) that prevent patching some other part of the OS with the monthly latest cumulative update (LCU).

Servicing stack updates ensure that you have a robust and reliable servicing stack so that your devices receive and install Microsoft security fixes.

Some organizations, admins and home users did not install the update on devices running Windows 7 and not doing so did not appear to have a negative effect on the update process as updates that were released after the release of the servicing stack update installed just fine.

That changed with the release of the August 2018 update for Windows 7 SP1. The update could not be installed on devices that did not have the servicing stack update installed; these devices threw error error 0x8000FFFF instead.

Installation of KB3177467 resolved the issue immediately but users and admins did not know about that until Microsoft added the information to the known issues of these updates.

Why did not Microsoft catch the error?

Microsoft states that it tests its monthly patches against fully patched systems only. The issue slipped by because Microsoft tested the patches only on systems with the updated servicing stack.

What is Microsoft going to do about it to avoid future issues?

Any future servicing stack update will be classified as a security update as well.

Now You: Did you experience the issue?

Martin Brinkmann is a journalist from Germany who founded Ghacks Technology News Back in 2005. He is passionate about all things tech and knows the Internet and computers like the back of his hand. You can follow Martin on Facebook or Twitter
View all posts by Martin Brinkmann →
Previous Post: « Windows 10 KB4458469, KB4457136, KB4457141 and KB4457127 updates
Next Post: How to download Windows 10 version 1809 right now »