YouTube Community is a new feature of the world's most popular video streaming site that allows content producers to interact directly with their community.

One of the shortcomings of YouTube up until now was that interaction between video producers and users was severely limited.

Users had options to leave comments underneath videos, and to send a message on the channel's about page.

Both options are far from ideal, which is why many content producers use other sites and services for that purpose.

A third-party report suggested in August that Google was about to launch a feature called Backstage on YouTube. Backstage supposedly would introduce options on YouTube to share photos, text, videos and polls with subscribers. 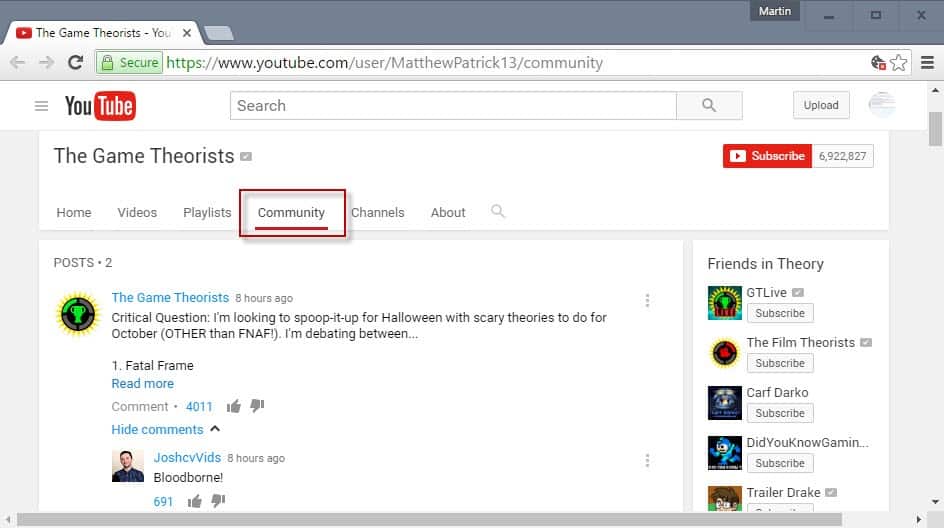 The feature is in beta currently. This means that only select channels participate in the community beta feature while all others don't have access to it yet.

The brand new Community tab on your YouTube channel gives you a new, simple way to engage with your viewers and express yourself beyond video. Now you can do things like text, live videos, images, animated GIFs and more, giving you easier, lightweight ways to engage with your fans more often in between uploads, in real time.

You can check out the Game Theorists channel on YouTube to see the Community feature in action.

Community enables channels to post messages, images and videos to that page. Google hopes that this will strengthen communities on YouTube, as communication is directly between channel staff and users.

The feature looks on first glance very similar to video pages on YouTube but with the difference that text or images may be posted instead of videos.

That's the only distinction for now it seems. The only other benefit is that it is easier to interact on the community page than on individual video pages.

Comments seem to be identical to those posted underneath videos, maybe less toxic but it remains to be seen if that remains or will deteriorate as well.

Now You: What's your take on the Community feature? Good move? Too late?