Kaspersky Cleaner is a free CCleaner-like program for Windows

Kaspersky Cleaner is a new program by Russian security firm Kaspersky that has been released as a free beta version on the company's website.

The program has been designed to assist users in removing junk files and temporary files from PC systems running the Microsoft Windows operating system, and to improve their privacy on top of that.

You can download a web installer from the Kaspersky website which you need to run on a local device to install Kaspersky Cleaner on the computer.

The interface of the program is bare-bones currently. It displays a "start scan" button in the center of the program window, and four additional icons below it that don't reveal right away what they are used for. 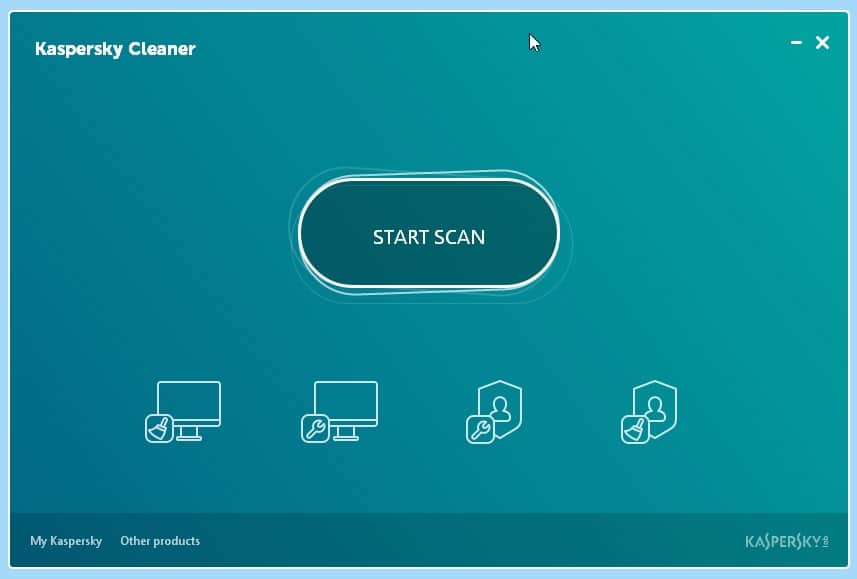 You need to move the mouse cursor over the icons to reveal their function. They do the following from left to right:

If you hit Start Scan, all of the four tools will be used to scan the system. The software displays the issues it has detected after the short scan, and it is up to you to fix them automatically, or review them first. 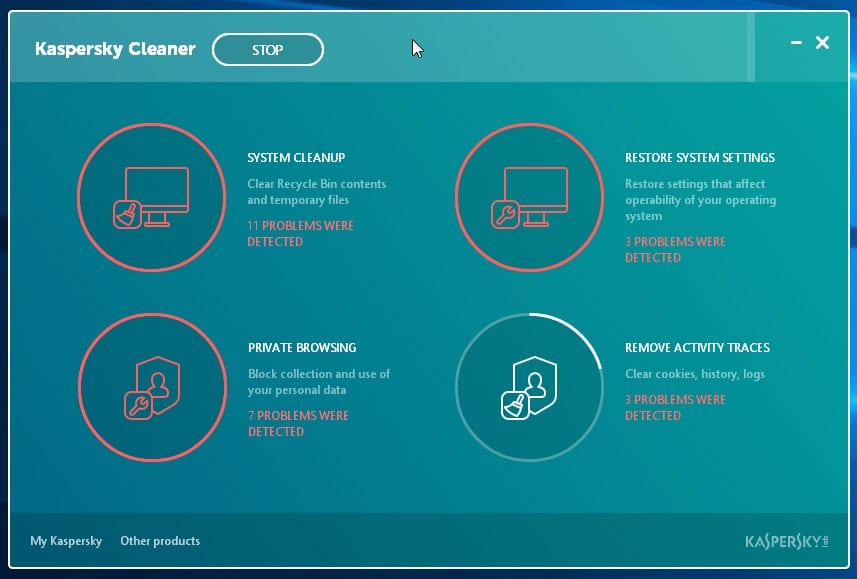 You can do that with a click on one of the tools which displays details of that particular scan on the next page that opens.

Issues are divided into important, medium-severe and minor problems, and color-coded on top of that. Red colored items highlight problems found during the scan that need your attention while green colored items indicate that everything's alright.

You need to go through the whole listing as issues are listed under their severity level and not collectively at the top. 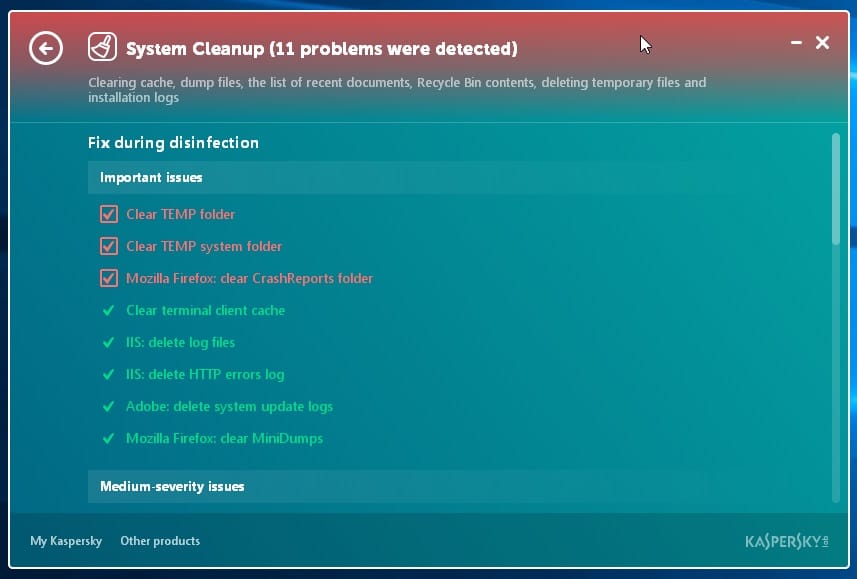 You may uncheck any of the issues found during the scan so that it is not addressed when you hit the fix button in the main interface after you went through the list of discovered problems.

The third tool, private browsing, is not appropriately named which you will notice when you open the items that it scans for on the system.

It has nothing to do with private browsing modes that web browsers offer, and will mostly detect Windows logging preferences. It does so like other privacy tools for the operating system by suggesting to turn off "features" such as participation in the Windows Customer Experience Improvement Program or the use of ad IDs by applications.

Restore System Settings is another tool that may require explanation. It checks various system-related settings, autorun, invalid file type associations or whether programs like the Task Manager or Registry Editor are blocked, and proposes to undo any issue found during the scan.

Kaspersky Cleaner offers a surprising number of items that it scans or recommends to change, but it does not come close to what everybody's darling CCleaner offers, especially if you consider that you can extend CCleaner's functionality manually or automatically using CCEnhancer.

Another issue with the current version of Kaspersky Cleaner is that you cannot customize the scan before you start it.  If you don't want particular items scanned or fixed, you have to have them scanned anyway and uncheck them each time after the scan to make sure of that.

Kaspersky Cleaner is an easy to use program for the most part, and while it may be tempting to hit scan and then fix to be done with it, it is usually better to go through all the issues found by clicking on each of the tools to make sure that you are okay with the proposed operations.

The program would benefit from a streamlined interface that displays all issues on a single page instead of divided into a maximum of four that you all need to click on one after the other.

The application is labeled as beta currently which means that it may see improvements before the first stable version of it gets released by Kaspersky. (via Into Windows)