This is Microsoft's new browser Spartan

Microsoft pushed out a new build to all Windows 10 Technical Preview users which includes the first official snapshot of the company's new browser Spartan.

You may have read about Spartan before on various sites as leaks of the browser were circulating in the darker corners of the web.

Update: Project Spartan launched in the Windows 10 operating system, and it was renamed to Microsoft Edge. End

Project Spartan marks the beginning of something new as it is not just an iteration of Internet Explorer. In fact, Microsoft will ship Internet Explorer 11 with Windows 10 as well to provide legacy support as Spartan won't.

One of the most exciting new features of Spartan is extension support which Microsoft plans to ship the browser with. While it is not clear currently how that will look like -- some sites suggested that Microsoft would adopt Chrome's way of supporting extension to be compatible with the majority of extensions for the browser -- it is a feature to look forward to. 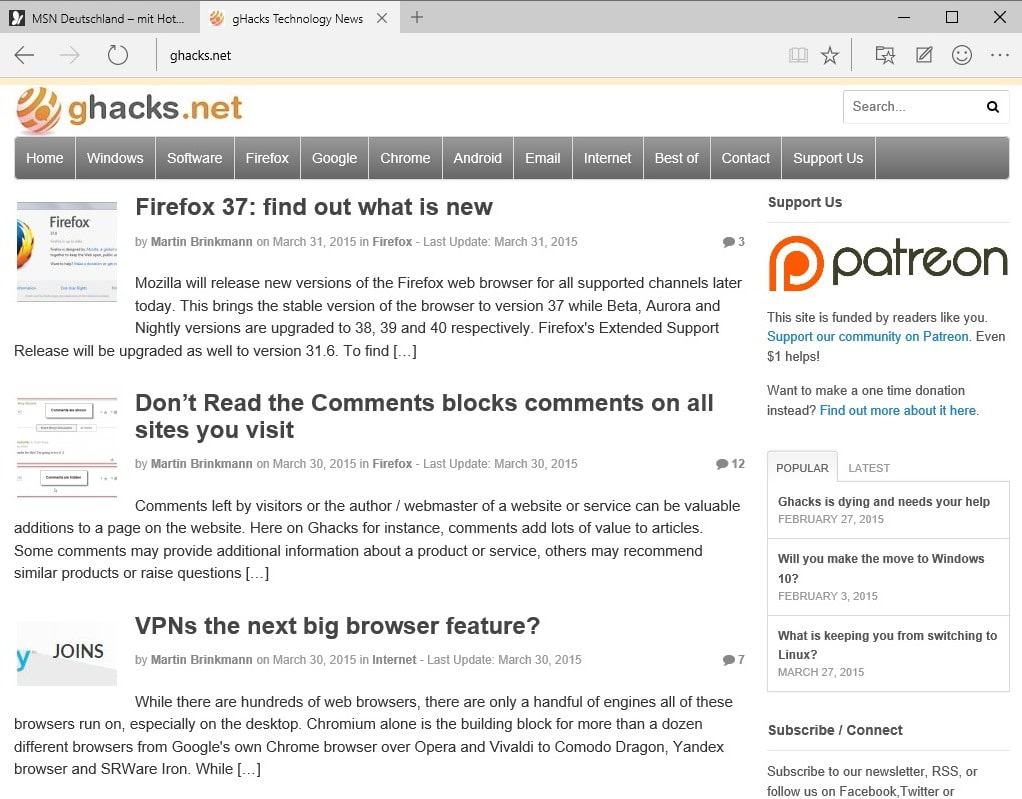 The Spartan version released with build 10049 of Windows 10 is bare bones currently. It is not really clear if that is by design or because lots of features are missing from it.

The current version can be best compared to many tablet or mobile browsers more than it can be compared to powerful browsers such as Mozilla Firefox or even Chrome when it comes to the functionality it provides.

If you check the settings for instance, you will notice that there are only a handful right now. While you can change the home page, enable or disable plugins, and modify a couple of other features such as cookie handling or reading mode settings, that's about it that you modify right now in Spartan. 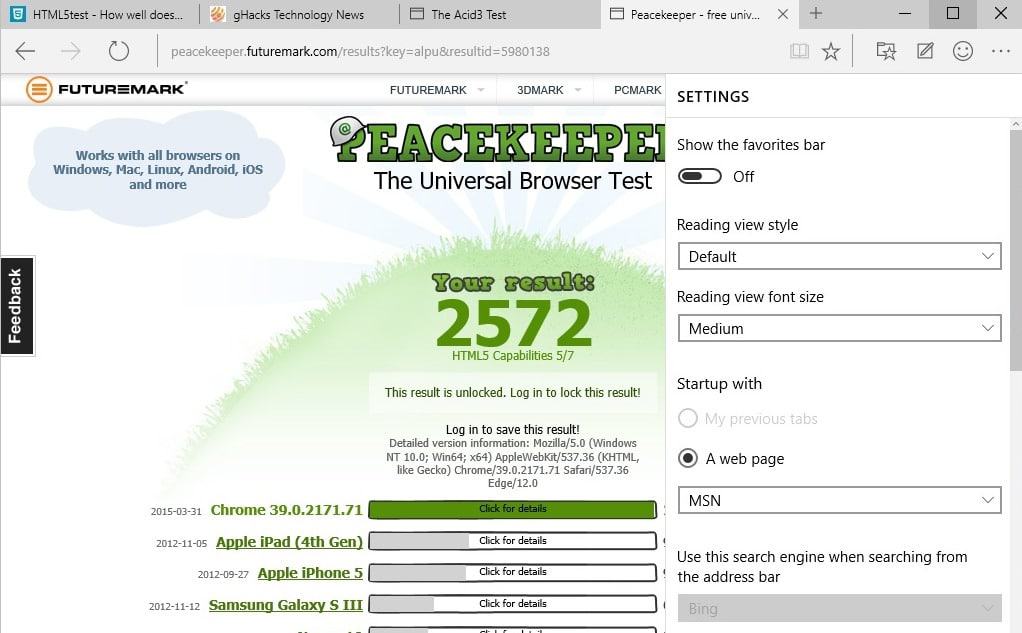 The browser interface is minimalistic. There is no title bar or status bar anymore, and tabs are displayed at the top of the window next to the window controls.

The address bare displays back, forward and reload buttons on the left side of the address and a bunch of icons on the right. These icons include reading mode, bookmarking, an option to display the favorites and reading list, and the new web note feature which shines when you connect a pen to the system. It is possible however to use it with the mouse instead.

As far as web notes are concerned, you can highlight elements on web pages, add text to them, cut them or draw directly on the page. There is no undo feature right now it seems.

Notes can be saved directly or shared using the operating system's share options listing all program's supporting that.

When you open https websites you will notice that they are not highlighted except for an icon in the address bar that does not stick out at all.

Microsoft added Cortana to Spartan in this release. The personal assistant is limited to the US version currently though. According to the company Cortana "remains in the background but provides additional information when you need it".  There is no option to turn off Cortana in Spartan right now. If you don't want to use it there, you can only disable Cortana system-wide for now.

Spartan seems to do a bit better than Internet Explorer in benchmarks and support tests. You should not expect it to reach Chrome or Firefox levels just yet though.

Project Spartan has been designed with simplicity and efficiency (in regards to memory usage) in mind. While Microsoft managed to deliver just that, it is almost certain that the browser won't appeal to the majority of tech-savvy users.

Core reasons for that are lack of control over features and lack of preferences and customization options in general. While this may change before the final release, it is unlikely that Spartan will match Chrome or Firefox in this regard.

For now, it looks like a solid mobile browser more than one for desktop systems. With that said, if you like simplicity and don't need customization options, then Spartan may be right for you.

Previous Post: « This is Spartan and what we don't know yet about Microsoft's new browser
Next Post: Is Microsoft's Spartan browser really becoming a contender? »