One of the things that I do regularly is to check open connections on a PC I'm working with to make sure that there are no leaks or ports open that I don't require.

While it is possible to use command line tools like ipconfig for some of this, I prefer to use programs like CurrPorts instead as they make life a lot easier by formatting the output and adding features to the list that you can make use of to investigate potential issues further.

PortExpert is a similar program that has just been released. It is available as a portable version and installer on the developers website.

Note: The regular installer contains sponsored contents. You can avoid those by declining offers when they come up or by installing versions without those offers.

The program displays all applications on start that are currently connected to remote addresses. You find web browsers here for example but also other programs such as Steam, email programs or messengers that connect to remote locations. 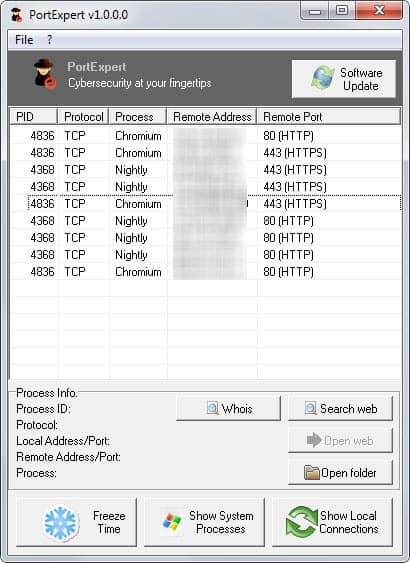 A click on a process displays additional details about it in the interface. Here you see the local address and port for example as well.

Buttons are provided to run a whois check on the remote address, to search for it on the web, to open the address in the default web browser, or to open the process folder.

Whois sends the data to the Domaintools service which displays Whois data that include the owner of the IP address and contact information. This is usually enough to determine whether a connection is legitimate or not.

The freeze time button in the interface stops the refreshing of the connections which can be useful to keep connections displayed that you want to investigate further.

PortExpert supports two additional features of note. The first adds all local connections to the display which means connections in the local area network the computer is connected to.

This can be useful as well, especially if your computer is not the only one connected to the network.

The third and final option is to show all system processes which may display local or remote connections as well.

PortExpert is a handy program for Windows users who want to check all local or remote connections on a computer running the operating system.

An option to export the information or at least log it is not available yet but would be useful. Another thing that may be of interest to some users is notifications when new applications connect to the Internet for the first time.

Previous Post: « VeraCrypt update brings TrueCrypt volume support
Next Post: PC Decrapifier 3.0 is a rewrite of the trialware and crap remover for Windows »