PC Decrapifier 3.0 is a rewrite of the trialware and crap remover for Windows - gHacks Tech News
ghacks.net

PC Decrapifier 3.0 is a rewrite of the trialware and crap remover for Windows

If you have ever bought a PC running Windows, you may have had to deal with quite a few programs and other annoyances installed by the manufacturer of the device.

It is common that factory bought PCs ship with program trial versions installed that will run only for 30 or so days before they need to be purchased.

Other annoyances may include desktop shortcuts to places like eBay on the Internet, or a bunch of applications by the manufacturer such as customer satisfactory surveys and such.

While it is certainly possible to deal with those annoyances manually, by uninstalling or deleting them one by one, it is usually something that cannot be done quickly due to the sheer size of annoyances.

PC Decrapifier is a long standing program that has been designed to deal with the majority of those programs automatically for you.

The main idea behind the program is to have it analyze the system to provide you with recommendations what should and should not be removed.

It is ideal for new PCs and less than ideal for PCs on which users have installed programs on already.

PC Decrapifier 3.0 is a major rewrite of the application. There is no changelog and it is not clear what has changed besides that.

You may notice that the interface has been modernized. 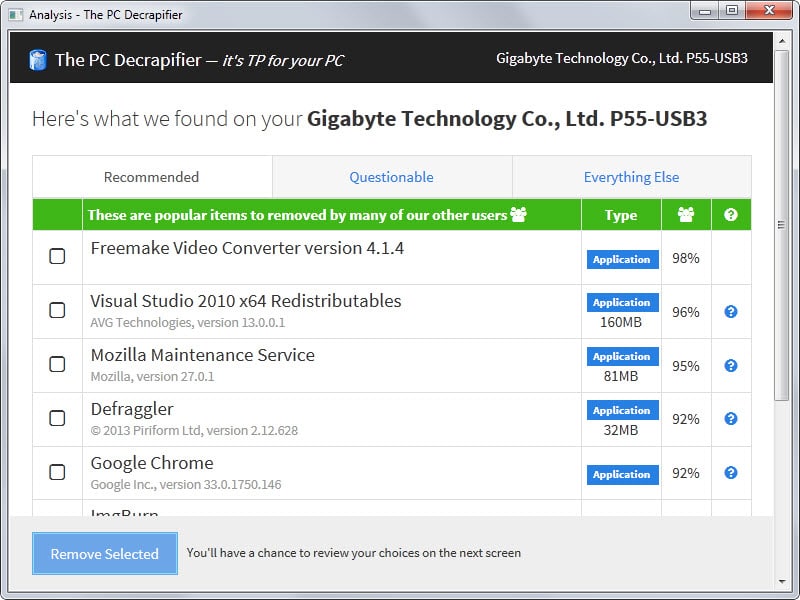 It displays found programs in the three groups recommended, questionable and everything else after the scan. Here you find listed program names and types, and how many users have removed the item (percentage).

These removal value seems to come from other users of the application and seem awfully high for some programs.

You can select none, some or all of the applications listed in any given group to remove them completely from the system.

As mentioned earlier, it makes sense to run the program on first run before additional programs are installed on the system as you will end up with legitimate programs being on that list.

Nothing speaks against running the program first before running a professional uninstaller such as Revo Uninstaller afterwards to remove the programs that PC Decrapifier did not identify correctly.

It makes little sense to run the program on a live system though that you have used for some time as you end up with lots of false positives.

PC Decrapifier 3.0 is free for personal use. It can be run right after download and does not need to be installed at all as it is fully portable.

Martin Brinkmann is a journalist from Germany who founded Ghacks Technology News Back in 2005. He is passionate about all things tech and knows the Internet and computers like the back of his hand. You can follow Martin on Facebook or Twitter
View all posts by Martin Brinkmann →
Previous Post: « PortExpert monitors TCP and UDP communications on Windows
Next Post: Leanify is a cross-platform console-based file size optimizer »