It did not take long before first extensions appeared in the Mozilla Add-ons store that changed various aspects of Firefox's new interface Australis.

In fact, the first extension was launched to store less than a day after Australis was integrated into the Firefox Nightly Channel.

It was clear, that this would not be the only solution to restore original functionality, or modify the new interface to improve its usability.

Australis Slimmr is a brand new extension that was published to the add-on store a couple of days ago. Unlike the previously mentioned Classic Theme Restorer which restores previous functionality, it changes how parts of the new interface look and feel. 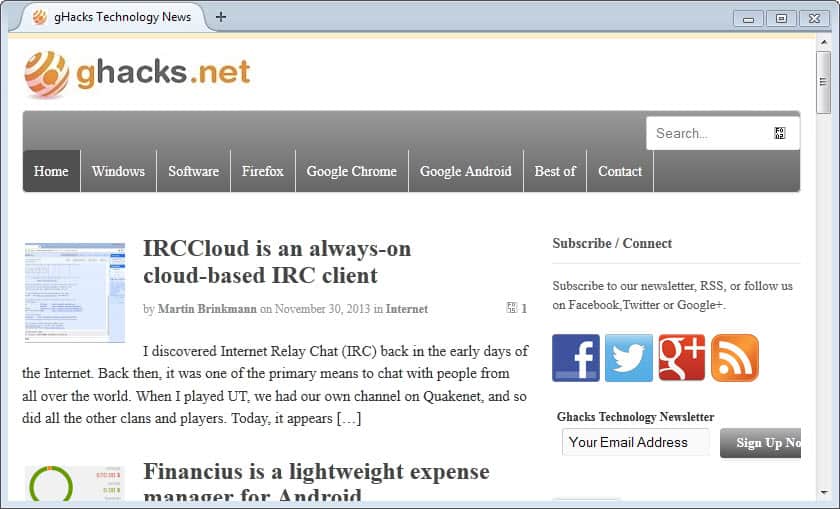 In particular, it offers the following options that you can configure individually:

The Firefox add-on will make the interface look like the one on the screenshot after installation. This is with all options enabled. Note that the navigation bar is hidden automatically, and will display when you move the mouse into the area that it occupies.

It is possible to disable one or multiple of the interface modifications that the extension makes available. If you do not like an automatically hidden navigation bar, or prefer tabs to be in their original position, then you can uncheck those items in the preferences of the extension to do so.

It is clear that the extension is not suitable for Firefox users who do not like Australis, as it does not remove the new browser interface.

Users who like the new Firefox interface on the other hand, but dislike some elements of it, may find Australis Slimmr useful as it can modify several of those.

Especially the option to compress toolbar icons is something that users may appreciate, especially since the small icons mode was removed from Firefox by Mozilla. If enabled, it will make the toolbars slimmer so that additional space is freed up for the display of websites in the web browser.

It is very likely that it won't be the last extension that tries to improve the usability or appeal of the new Firefox interface. Considering that Australis is still only available in the Nightly channel, I'd say it is a good start for users who dislike the interface.