BitTorrent Inc. launched the new BitTorrent Sync file synchronization application based on BitTorrent technology back in January. We managed to gain access to a private alpha version of the application and published our first review in February of the same year.

Public alpha versions for desktop PCs and Android were released a couple of months later, with the PC version reaching beta status back in July 2013.

Today the company announced that it has updated BitTorrent Sync to version 1.2. While still in Beta, the new version ships with several improvements over the previous version.

Users of the application benefit from improved sync performance while syncing files on local area networks. Sync speeds doubled to nearly 90 MB/s on networks according to the company, and while that will certainly vary depending on how the network is set up, it is definitely a step in the right direction to increase the appeal of the application to a larger audience. 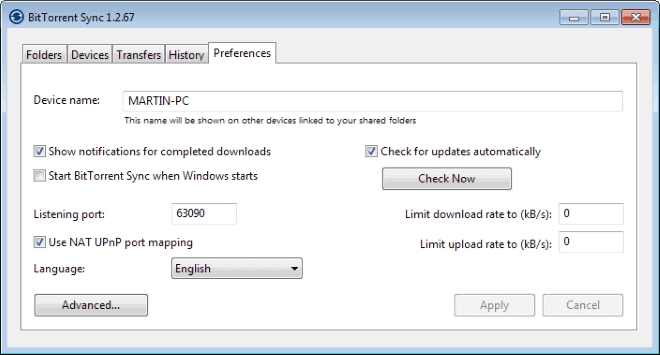 According to the company, more than 1 million active users use BitTorrent Sync each month. Since the release of the beta in July, more than 30 petabyte of data have been synchronized using the application.

Is that a lot? 30 Petabyte are 30,000 Terabyte or 30,000,000 Gigabyte which sounds like a lot. If you divide it by the number of active users, you get a total transfer rate of 30 Gigabyte per user over the course of the beta.

Probably the most exciting news is the integration of an API that developers can make use of to distribute data on the platform.

Some of the possibilities that the API introduces are options to store encrypted file copies on a remote server so that users can create their own private and secure cloud, options to integrate Sync into a different user interface, or support for selective synchronization.

The API just like the main program is available as a beta version right now. Interested developers can check it out here on the BitTorrent Sync website.

One of the appeals of BitTorrent Sync is that it does not require a central cloud-based server to synchronize files. While that means that the computer systems need to be connected to the same network or reachable on the Internet, it adds extra protection to the process as data is not stored on third party servers.

Then again, the service is closed source which will surely keep privacy conscious users away as many prefer Open Source solutions that they can vet before use.

It is clear that BitTorrent Sync is not made for all synchronization needs, at least not in its current state. It has its appeal to users who want to sync data without having to go through a central server but is not really an option right now for users who want data to be available in the cloud at all times as well.

Development is progressing in a steady pace though, and it is likely that other missing features will make an appearance in future versions of the application. It does not necessarily have to be as part of the official client though, as third party developers can now make use of the API to create their own programs and services around this.