When Refresh PC 1.0 was released back in 2011 it had one problem that had nothing to do with the program's functionality. A scan on a meta virus scanning service such as Virustotal returned several positive hits, up to seven, that identified the program or at least part of its code as malicious.

What made this worse was that the engines of respected companies such as Symantec or Dr.Web were among the engines that identified the software as malicious which gave more weight to the claim.

At least some users decided not to make use of the program at all because of this; the issue impacted the program's distribution and reach to some degree. 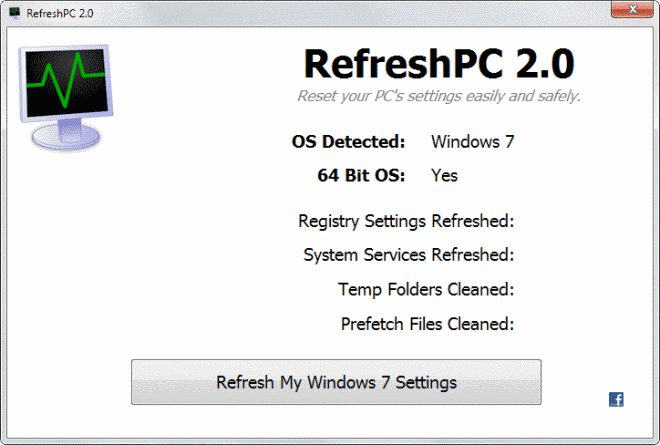 Today, RefreshPC 2.0 has been released and while it is not really clear what changed in the new release, there is at least one positive aspect about the new release.

The program interface has not changed at all, and the most likely change, besides resolving the false positive issue, is support for Microsoft's newest operating system Windows 8.

RefreshPC 2.0 resets default Registry settings and system services only and does not touch installed programs or personal files at all. The program resets only default Windows Registry keys and services to their default state and ignores any third party additions to the Registry and services in the process.

This can be very useful if your PC has been successfully attacked by malware which modified settings in the Registry, if you ran a tweaking software that made modifications that you cannot undo anymore, or if software installations modified certain key features of the OS.

The downside of the program is that it is not forthcoming in regards to the changes that it will make. You simply do not know which keys and services it will refresh which is a big issue as you have no control over the process because of this.

You only receive basic information after you hit the refresh settings button in the program interface. 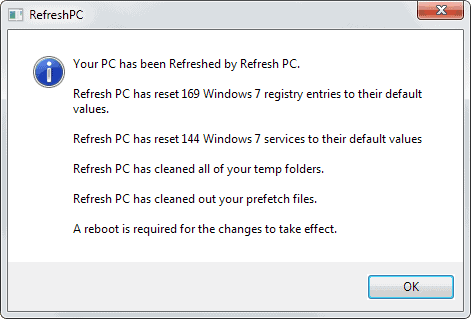 The program prompts you during start to create a system restore point so that you can go restore your system if things do not go as planned.

Note: The program includes adware offers that are launched during installation. Make sure you decline those if you do not want them installed on your system.

Update: Refresh PC is no longer maintained. While you can still download the program from third-party websites, it is suggested that you use it only if you create a backup beforehand as it may not work properly anymore.