I like to play shoot'em up games, especially those that let me upgrade my ship in a way or two. This week's Game Saturday game Betty IX is one of those games. My first impression of the game was that it was slow-paced, as I selected normal on the selection screen thinking that this was linked to the game's difficulty level. It was not however. Instead, it is linked to the speed of the game.

My suggestion therefore is to select Fast or Turbo instead as it plays better this way.

You can control your ship with the mouse, the arrow keys or the WASD keys on the keyboard. Wait, what about firing weapons? That's all done automatic for you, so that you can concentrate on maneuvering your ship around on the screen.

You do so to dodge enemy bullets that fly in your direction, and to position your ship so that the bullets it fires hit enemy ships on the screen. 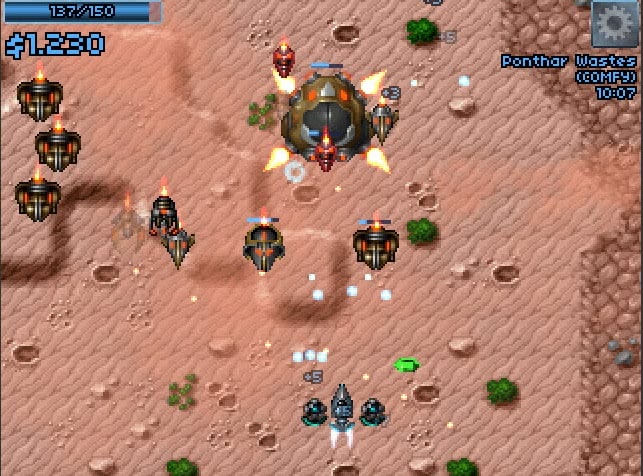 Some enemies drop crystals on the ground which you can pick up if you fly over them. This is extra cash that you desperately need to upgrade your ship between missions. While you do earn cash from destroyed enemies automatically, it is the extra cash that can make the difference.

The following upgrades are available:

You may notice that some levels become extremely difficult to beat until you bought upgrades that help you out here. Most notably damage of course, but also attack rate and energy source. From level 13 on it is shield that you need to boost as new attacks are introduced at this stage.

You encounter boss ships at the end of every fourth level group which take a punch. It is not that difficult though to defeat them, you just need to spend more time doing so.

You can replay the game in a higher difficulty level after you beat it if you select to do so. You keep all your upgrades and four additional levels

Betty IX is an entertaining game, at least for a while. It is definitely a fun game to play even though I could not convince myself to beat the game a second, third and fourth time to play the unlocked bonus levels. More diversity in terms of enemy formations and attacks would make the game more interesting in the long run as well.

Still, if you like arcade shooters give it a try. And if you are particularly good at them, play it in turbo difficulty level.