I have been monitoring several RSS reading services ever since Google announced that it would shut down Google Reader. One of the services that has benefited from Google's announcement is Feedly, a service that is available as a browser extension and as apps for iOS and Android.

Feedly 48 hours after Google's shut down notice announced that more than 500,000 Google Readers joined the service in that time. Today, the company announced that the count is now sitting at more than 3 million new users ever since Google made the intention to shut down Reader public.

Feedly improved the browser extensions recently, adding a much needed denser title only view mode to them. When I'm browsing RSS feeds, I do so in title view mode as it enables me to quickly go through dozens if not hundreds of feeds. Any feed of interest gets either marked as a favorite, or opened directly so that I can read the article and see if it meets my expectations.

Good news for users of Feedly's mobile apps: they have been updated today with several improvements and one inconvenience, but more about that later.  The developers have added a title only view mode to the apps which you can use to browse though headlines quickly and without interruption. Take a look at the following screenshot to see how this looks like on Android devices. 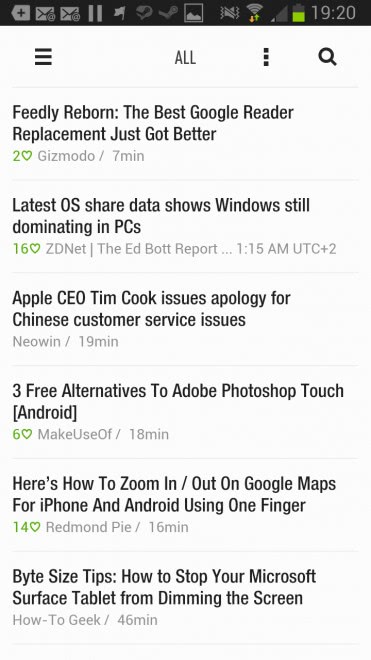 To enable list view tap on the three dots next to search and select the title only view mode from the menu that opens up.  The apps feature a new must reads section that you find in the Today section and the feed selection panel. It may be useful to some depending on how well the service manages to find the "must read" feeds. For me, it is not that useful as I tend to browse all feed updates anyway and prefer to decide for myself which items are must read and which are not.

As far as drawbacks go, Feedly seems to have removed the ability to search only inside your subscribed feeds. This was done according to Feedly because of the resource intensiveness of the feature. The company announced that is is working on a new implementation that should be ready later this year.

It has also been confirmed that a Feedly Pro version is coming soon. It is not clear what it will feature other than offline support which has been confirmed in one of the comment replies.