Google, RSS and the backlash of the Internet community - gHacks Tech News
ghacks.net

Google, RSS and the backlash of the Internet community

Google announced that it will retire Google Reader, probably the most popular RSS feed reader in existence, on July 1, 2013. The news shocked many users of the service and made huge waves on social media sites and more or less every tech news site on the Internet.

In the day that followed, users created petitions hoping that Google would reconsider the move. Others created huge lists of RSS reader alternatives, and the technical inclined started to work on projects to bring back Google Reader functionality in new and existing products.

Google never really answered why it decided to retire Google Reader. The only explanation the company was giving was that usage declined in recent time, but that seems to be an unlikely core reason considering that Google Reader was never promoted and that updates really slowed down in recent years as well. Naturally, usage declined because of that and Google could have steered the wheel around easily. 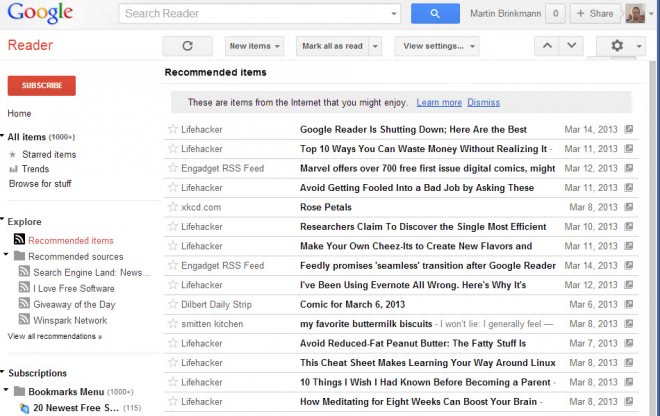 Users on the other hand may not be as thrilled and it is very likely that the exodus from Google Reader is not leading the majority to Google Plus, but to other RSS readers instead. The main reason for that is that Google Plus is not like Google Reader at all. While companies and websites post some or even all of their stories to the site, it is lacking features that make news accessible. You can't really get that one-line per news post layout on Google Plus for instance right now to browse a large number of new articles rapidly.

What Google may not have considered when it decided to retire Google Reader is that users of the product are for the most part tech savvy Internet users that are part of the backbone of the Internet community. These users read a lot of news items using RSS, and when they are done, they start to take advantage of those news items and spread them around as well.

They have already started to create alternatives for Google Reader and while none is replicating Reader's functionality 100% yet, products will come out eventually that come very close to what Google Reader is offering right now.

What more? If they have not done so already, they start to see Google in a different light. It is not the company that creates software and services for users. It is a company that tries to make money, one thatt will sacrifice popular products if they stand in the way of that. Realizing that will certainly be a bitter pill for some users.