Website Reputation Part 2: Why you need to verify it regularly

I received a couple of emails in the past five days that informed me that this site's newsletter and later on the site were blocked by Trend Micro. The message that site visitors received was troubling. Trend Micro claimed that every page of the site was a "dangerous page" and that the company has confirmed that the website can "transmit malicious software or has been involved in online scams or fraud".

The online check at Trend Micro's Site Safety Center even claimed that the site "contains malicious software or defrauds visitors". None of this was true obviously and certainly reputation damaging considering that it is likely that the majority of users of Trend Micro products that went to Ghacks.net probably decided not to proceed after they have received the warning.

Webmasters can submit a reclassification request to Trend Micro in which they can state that the website is not what the company claims it is. You can select a different category for the site and add a comment that may help your case.

It takes a couple of days before you will receive a response. To expedite the request, I decided to post in the website reclassification thread on the official Trend Micro community forum.

The site's classification has been changed today and Trend Micro customers should not receive warning messages when they try to open it. 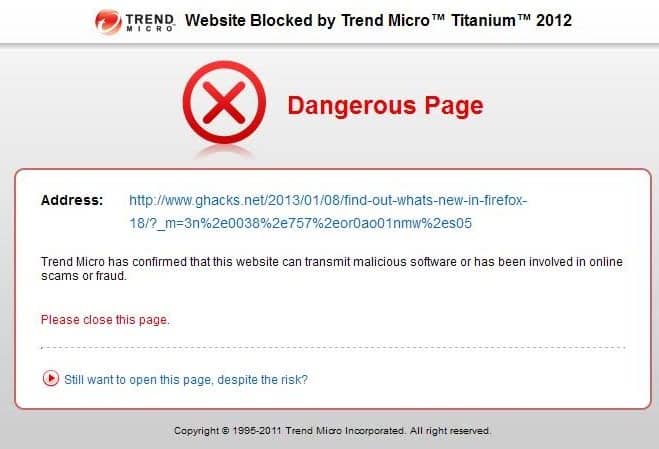 It is not the first time that I had issues with online reputation management services. You may remember that another site of mine, Loginhelper, was flagged as a malicious site by Web of Trust and that it took some time to recover the site's reputation.

If none of my visitors would have notified me about the incidents, I'd probably never known about them which could turn out to be a serious problem for the site in the long run.

The big issue here is that many services like WOT or Trend Micro exist that rate websites or services, and that you have to keep track of them all to make sure your site was not added to a blacklist or received an unjustified classification. I have yet to find a way on how to do that effectively. One option is provided by Virustotal's url scanner. It covers about 30 or so services which makes it a good start Not all Internet services are included here on the other hand which means that you still need to check others regularly as well to make sure that your site turns up clean.