I have to admit that I'm still not using Twitter actively, do not have the time for it and while that is certainly an oversight as it is an excellent platform to network and communicate, it is just not working out for me at this point in time. If you are a regular on Twitter, tweeting away with business partners, friends, family or complete strangers, you may be interested in a software that helps you download all public photos a Twitter user has posted in recent time. To be precise, it only retrieves photos posted in the last 200 tweets of the user you select, but that is better than nothing I suppose.

The program is as bare bones as it can be. Download it to your system and run it afterwards. While not explicitly stated, it seems to require the Microsoft .Net Framework to run. Enter the Twitter username of the person you want to download the images from and click on the download button afterwards.

It takes some time before thumbnails are shown in the program interface, and they look as if the color profile has been heavily reduced. That on the other hand is only the case for the thumbnail preview images and not the actual photos the program downloads to your PC. 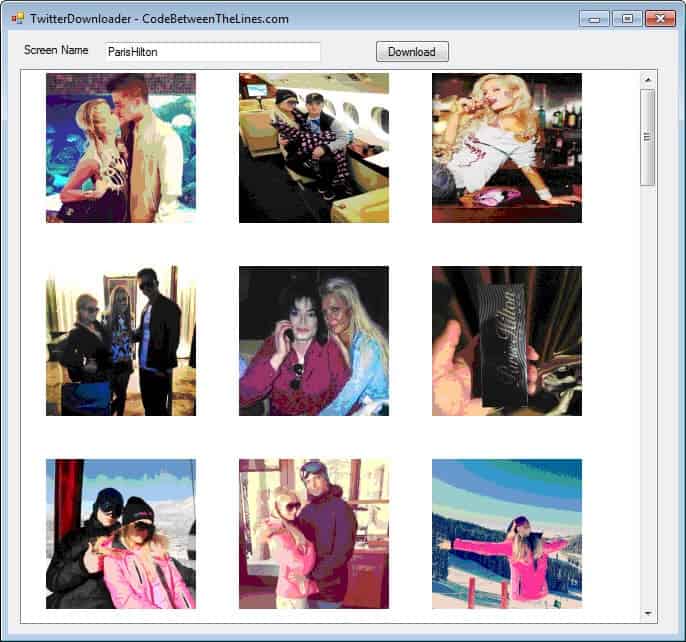 The program saves the photos into a directory named after the Twitter user's screen name, so make sure you have enough storage space on the hard drive you run the program from as you can't modify the save directory or any of the other parameters.

I would like to see the 200 message limit increased if that is possible and not artificially limited by Twitter in the service's APIs.

The developer has designed the program as a response to Twitter's removal of the photo grid view feature. While designed for that, you can use it to download photos quite easily from all Twitter accounts. If you have a celebrity you are fond of, you can download all the photos he or she posts on Twitter regularly to keep up to date with what's happening in the celebrities cloud castle for instance.

If you prefer to just get back the photo grid feature on Twitter you can alternatively install the Google Chrome extension  Please bring back photo grid view ! which does that. (via)