Add-ons Manager won't open in Firefox 17? Here is the fix

Firefox 17.0 has been released yesterday by Mozilla and Firefox users have been updating their browsers ever since. Some may have noticed an assortment of odd problems in the browser after the update, among them that the Add-ons Manager won't open up anymore, or if it does, that no clicks are accepted on its page.

The issues are caused by the Tab Mix Plus add-on that adds a number of tab-related features to the Firefox web browser including options to duplicate tabs, control the tab focus, what mouse-clicks do and a lot of other things. The latest official version of Tab Mix Plus is not compatible with Firefox 17 at the time of writing. You can verify that by yourself by disabling or uninstalling the add-on in Firefox. If you can't access the add-ons manager, open your Firefox profile and move the add-on from the extensions directory to another folder to remove it temporarily from the browser. Make sure Firefox is closed during the operation.

To find the profile folder click on Firefox > Help > Troubleshooting Information and click on the Show Folder link next to Profile Folder here. You will also see a list of installed extensions here and their ID, which you may need to identify the proper file / folder that you need to move out of the extensions folder. 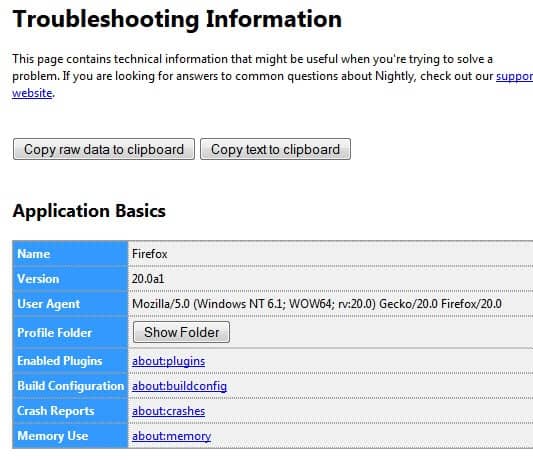 When you start Firefox afterwards, you should notice that everything is back to normal.

You are probably asking yourself how to fix the issue. While you can leave the Tab Mix Plus disabled in the browser until a new version is released, some users may not want to use Firefox without the extension. A development version of the extension has been posted on the official support forum that resolves the issues that users experience after upgrading to Firefox 17.

Download the add-on from the forum - or more precise from Dropbox where it is hosted - and drag and drop it into the Firefox window once it has been downloaded. This installs the latest Tab Mix Plus version in the browser. Note that this version has not been verified or checked up by Mozilla yet.

Previous Post: « Watch web videos in their own window using PopVideo for Firefox
Next Post: Mozilla: no more Windows 64-bit builds of Firefox »