There are probably a dozen or so free disk analysis tools available for the Windows operating system.

These programs display a visual representation of the used disk space on a hard drive or a selected folder giving users options to find out which programs and files are using most of the hard drive space.

Update: Disk Falcon is no longer available. We suggest you use programs like WizTree or TreeSize Free instead. If you run Windows RT, you cannot use the mentioned programs unfortunately. You canÂ  select Disk space under PC and Devices in the Settings to get an overview of some core areas, however.

What's so special about Disk Falcon that it needs to be reviewed here on this blog? The main reason is that it is the first app for Windows 8 that visualizes the disk space usage of folders or hard drives.

As you know, Windows RT users can't install desktop programs at all, and even x86-based Windows 8 users may find an app useful that highlights the biggest files on their drives. 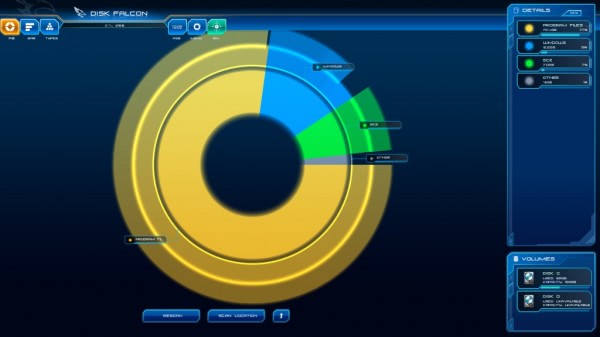 The first thing that you need to do after installation is pick a folder or drive that you want to analyze. Some reviewers of the app noticed that the data gathering part is rather slow, and that they'd recommend to only select folders and not whole drives for analysis.

The program was reasonably fast on a test system with a 160 Gigabyte Solid State Drive. It took a couple of minutes tops before all folders of the drive were processed. Not as fast as our favorite WizTree though which displays data near instantly but still, not super slow.

Disk Falcon displays the data in a pie chart by default, which you can change to a bar, file type or age-specific display using the top menu buttons. Both the pie chart and bar display allow you to navigate through the structure, to look closer at specific folders of interest.The right sidebar displays color coded folders, their total size on the disk and percentage values.

The app lacks options to delete or move data right from within its interface. Considering that it displays in full screen, it is less usable than desktop programs that offer similar functionality. Regardless of that, it is the first app of its kind for Windows 8 and therefor the only option for Windows RT users right now to analyze the disk space of their system.

Disc Falcon is a solid option for users of Windows RT. Users who run full versions of Windows 8.1 may want to use desktop programs instead for the job as they do a better job (faster, search and filtering better, more options in general).