Nuclear Plant puts the player in the role of a survivor of a nuclear war that had 99% of the world's population as causalities. What's even more pressing is that the radiation mutated plants and animals, and that oxygen runs low on planet earth. You have got a seed to change that, and a lab to grow the seed. Growing is on the other hand only one of your tasks, as you are also the prime and only defender of the plant.

I have played - and I think reviewed - a game like Nuclear Plant before but can't find it in the archive. It had to do with a balloon that you had to fix and set up properly to escape.

You control the player with the arrow keys or wasd, and aim and shoot with the mouse. One of the most important keys of the game is the down key as it starts research or grows the plant when you are standing next to one of the buildings. 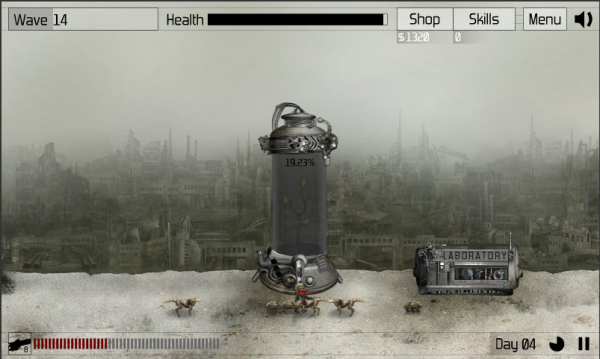 Waves of enemies enter from the left and right screen borders, and it is your task to eliminate the threats as quickly as possible to continue your research or growing of the plant. Research awards you with skill points which you can spend on a number of skills that help you in the game. From faster reloading speeds to better accuracy, faster plant growing and better health generation, it is all there and probably best to start directly when the game starts. You earn money for killing attackers which you can then spend in the shop to buy better weapons or a health pack. These weapons all remain available during waves, and you can switch between them with the 1-8 keys on the keyboard. The usual assortment of hand guns, sub machine guns and powerful end game weapons like the minigun are available.

It does not really make sense that you can earn money and buy weapons for it, but hey, it is a game and it is fun to play. If you are an experienced player you probably find the game to be a bit on the easy side of things.Â  It takes way too long before waves start to become more aggressive, and at that time, you are that buffed that it should not really matter anymore.

Do not get me wrong though. It is fun to play, and the twist at the end is quite nice. Still, once you played through there is not really any need to go back and replay the game, unless you want to beat your own highscore.

Visuals are quite nice, even though the character model and attackers feel kinda out of place on the screen. I can't really say why that's the case, maybe it is because of the titled surface or the drawing style.