What is Steam Greenlight?

If you have opened the Steam store in the application or on the website recently you may have noticed the Steam Greenlight ad at the top of the main store page. When you click on the link you are taken to the Greenlight page that lists a number of games that are not yet available on Steam. The idea behind Greenlight is to get the Steam community involved in the game selection process on Steam.

Every Steam member has a vote, and games with many positive votes or promise will be added to the Steam store eventually. That's the basic concept. Please note that this is more about independent games than full price titles and that the majority of gamers have probably never heard of the games that are listed on Steam Greenlight. Unless you happen to play games on iOS or Android, as many games listed on Steam Greenlight at the moment appear to be ports from those mobile systems. 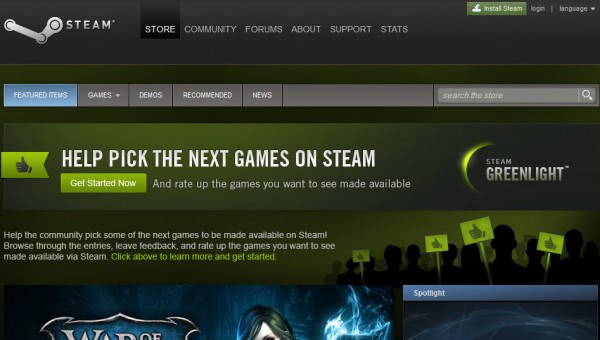 The individual game pages offer the same set of information that Steam store games offer. You get screenshots and sometimes videos, information about the genre, platform and languages, as well as a description that informs you on game mechanics. What you get in addition are user comments - which are not available for Steam store games - and options to to rate a game up or down, report a game, or add a game to the favorites. You can filter games by genre, platform or players on the start screen so that only games that you are interested in are displayed. If you prefer to play with friends, you could for instance filter for co-op or multi-player games to only see games that allow you do to that.

What's interesting is that many of the games currently featured on Greenlight may not be complete yet. Valve actually encourages developers to post their games on Greenlight as early as possible for valuable community feedback as game development progresses.

It is comparable to crowd funding platforms like Kickstarter or Indiegogo, only without the funding requirement. The more votes a game gets the better its chance for inclusion on Steam, provided that the developers manage to complete it.

Steam Greenlight is an opportunity for smaller game developers to get their games on Steam. The problem they had with the previous process was that only a handful of reviewers decided on the fate of the game. While they may have got it right many times, they may have also missed opportunities by declining games that would have been interesting to a large audience after all.

It is a new concept and we have to wait how this evolves in the coming months. What's your take on this new concept?