Opera Mobile use 47% up, impressive growth in emerging markets

Opera Software's ability to grow even in markets where it is facing multi-billion Dollar companies like Apple, Google or Microsoft has kept the company alive throughout all these years. It is like David is again fighting against Goliath, but this time, it is against several Goliaths in every country of the world.

One of Opera Software greatest strengths is the company's mobile strategy which has seen impressive growth in the last couple of years. In the past twelve months, Opera Mobile products grew by 47% surpassing the 200 million user mark in June 2012. About 17 million of these users are Opera Mobile users, while the bulk of the 200 million total users are using Opera Mini instead.

But Opera has not only noticed an upwards trend in users, but also in pageviews which grew to over 115 billion pages in June 2012, an increase of more than 55% in comparison to June 2011. 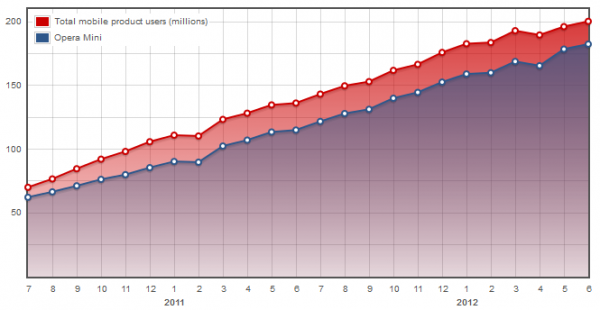 Opera's growth is especially apparent in emerging markets. In Africa, Opera Mini's user base grew by more than 100% in 36 countries, with Liberia topping the charts with an unbelievable user growth of 2904% in a year's time.

The core reasons for Opera Software's success in Africa and other emerging markets can be attributed to several factors. First, in these markets, cheaper phones have a much higher market share than top of the line products such as Apple's iPhone or the majority of Google Android devices. When you look at the top 10 handsets in African countries, you will notice that Nokia is the dominant company here, followed by Alcatel and then Samsung.

Opera in particular is benefiting from distribution deals with telecommunication companies that ship the browser with their devices.

Will Opera's growth continue? It is likely that it will, at least in the next twelve month period as the company has brokered deals with major Indian and South-American telecommunication companies.