One of the things that you can't do in the Windows 8 Release Preview is create desktop shortcuts for Metro apps. Say you have a favorite Metro app that you want to access regularly from your desktop.Â  In Windows 8, you would have to press the Windows key first, and then either use the search to find it or locate it in the Metro interface and click on it to start it up.

If you have installed a program like Start8, you may get direct access to the app via the start menu that those applications add to the Windows 8 operating system, but if you do not use those programs, you are pretty much without options to create shortcuts for Metro apps. 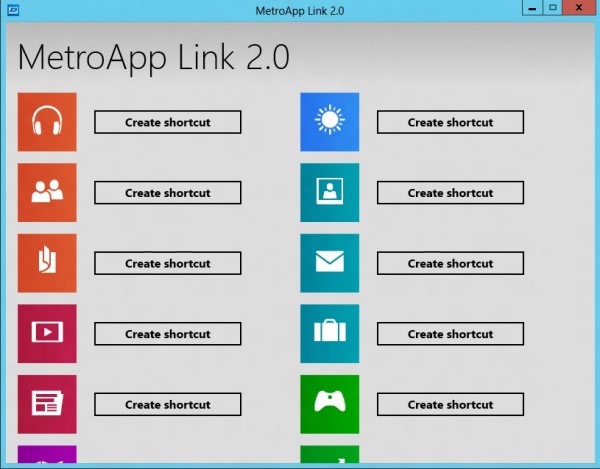 You can start the program right after you have downloaded and unpacked it on your system. Note that the Smartscreen Filter may kick in to prevent that you run the program on the system. This is a protection filter that is blocking new and malicious programsÂ  from being launched or installed. You can bypass the Smartscreen Filter easily with a click on more info though.

The program displays only the app icons and no titles but since the apps use fairly general icons it should not be too hard to identify the proper apps that you want to create shortcuts for. Simply click on create shortcut and a new desktop shortcut is placed on your Windows desktop.

You receive a security warning when you click on the shortcut for the first time. You can uncheck the always ask before opening this file box to prevent this from happening in the future. The program then loads the app right in the Metro interface as if it was started there.