Opera Software just a few minutes ago has released an update to the desktop version of the Opera browser. Opera 12.01 is a security and stability update that falls in line with the company's previous update cycle that iterates between larger and smaller updates.

Existing Opera 12.0 or earlier users can run an update check in the browser to download and install the latest version of it automatically. This is done with a click on the Opera button, and the selection of Help > Check for updates from the menu that opens up. The browser will eventually pick up the new version automatically to offer an automatic update without manual check. 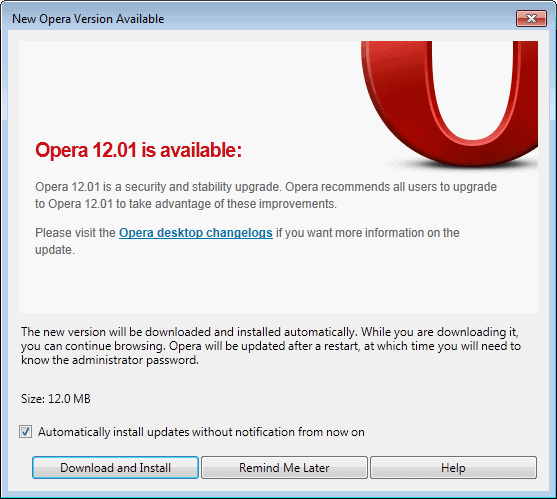 New and existing users who do not want to update the browser using the built-in updater can download the latest version from the Opera website instead. It is offered as usual for all supporting operating systems and languages.

The changelog lists several fixes and enhancements that have made their way into Opera 12.01. Here is a selection of important ones:

The new version on top of that patches several security vulnerabilities in Opera 12.01, of which some can allow attackers to execute code on the target system. You find additional information about the security fixes linked from the official changelog. Mac and Linux users need to navigate back to the main changelog directory to access the log for their operating systems.

Previous Post: « Opera Mobile use 47% up, impressive growth in emerging markets
Next Post: Opera crashing or freezing? May be out-of-process plugins »