Relic of War is a strategy game set in an alternate World War 2 timeline. Players can chose to play the Allies or Axis, and the choice defines both the starting position on the world map and the type of troops one can draft into military service. When you select to play the Axis you start your game in Germany, while the Allies start in the US.Â  Your task basically is to conquer countries, and you do that by winning a series of decisive battles in each country. As Axis, you have to win four battles in Germany to capture the country and start conquering other territories in Europe. As the Allies, you only seem to get to conquer the United States though.

The game itself plays on 2D maps where you hire different types of troops that from that moment on act more or less independently. While you can give them orders such as retreat, stop or forward, they do shoot and move most of the time on their own (unless you disable auto-move) You can however use support options, like dropping medpacs on troops or having fighters assault enemy lines, to support the troops in battle. For the most part though, it is more about sending out the right troops, making the right support decisions, and buying the right extras and upgrades to make the troops more effective in battle. You can sometimes build fortifications on the map which cost some of the precious gold that you generate, but are excellent choke-points that enemy units will have troubles passing by without taking huge losses.

You earn experience with every map that you beat which is awarded to the troops who played a role in the battle. Troops level up eventually which makes them stronger and more fearsome enemies. Medals are awarded to the player as well which can be invested in a number of upgrades that are divided into squads, support and upgrades. You can unlock new troop types in squads, which is an extremely important thing to do early on considering that the new troops start at level 1. In the non-premium version, players start with two basic troop types and two unlockable tier one units, and can make additional units available through the purchase of upgrades.

Upgrades are sorted into categories like economy, research or armory which provide you with a wide variety of advantages. Economy for instance increases the maximum number of troops that you can recruit, armory makes your troops more powerful, and research unlocks new unit types and makes buildings that you capture or have more powerful or resilient. 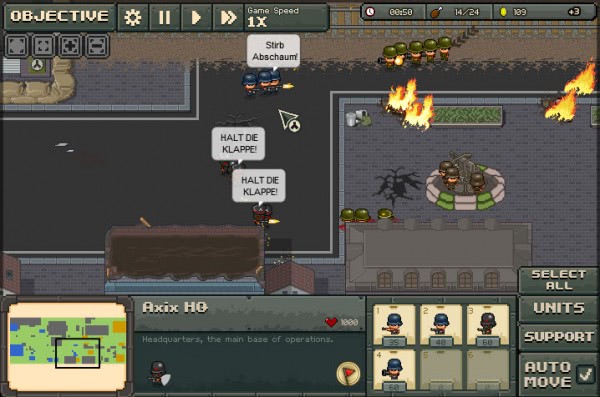 The last level of a region always adds a boss to the map that packs a punch. The boss usually has lots of hitpoints and firepower, and walks among the regular troops that the AI spawns all the time. This adds to the variety of the game.

The presentation itself is pretty good, especially the briefing scenes with excellent drawings that have an Anime-feel to them. As far as controls go, you can control the game only with the mouse, or make use of keyboard shortcuts to quickly switch between troops and issue commands.

Relic of War is a fun game to play for a while. The developers have added several mechanisms to the game that keep you entertained while playing. The upgrade and experience system for instance, or the boss fights. Still, you may eventually feel that there is not enough diversity in game play to keep on playing. Still, a great game that you can play directly over at Armorgames.