Strike Force Heroes at its core is a team deathmatch game that you play against AI controlled opponents. It has a few similarities to games like Unreal Tournament or Quake 3, despite the fact that it is played in 2D and not a 3D environment. You for instance have options to select different weapons that you can play with and switch while playing.

There is more to the game than just the shooting part though and this is where it actually gets interesting. The game ships with four different classes that serve their purpose in the game. The tank class for instance is a heavily armored class that can pack a punch, while the sniper is deadlier but also fragile especially when enemies manage to sneak up on him. 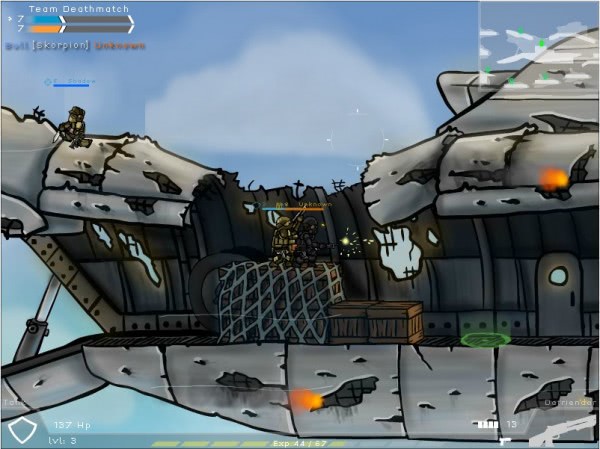 Each class gets experience while it is being played in the game, with level ups granting access to new equipment unlocks and improved stats. You earn money during matches which you can invest in better weapons, but also one active skill and killstreak. When you look at the weapons, skills and killstreaks available you will notice that popular choices from games like Counter Strike, Battlefield 3 or Modern Warfare have been added to the game. From the riot shield to air strikes, it is all there and helps keep the game interesting after a few matches. 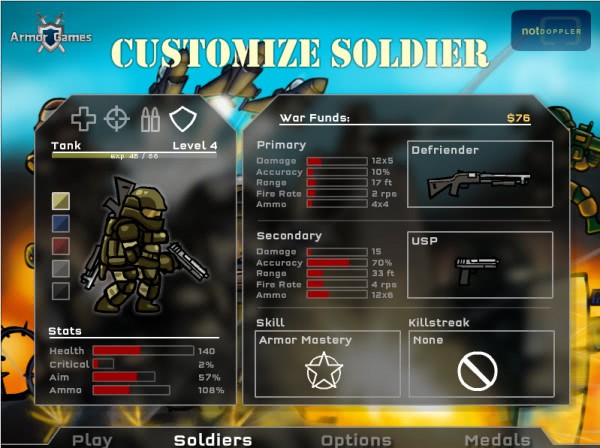 The matches play in various scenarios, from a village that could have been taken out of the latest Rambo movie to an air scenario and caverns, there is lots of variety in the game in this regard. You control the player character with the WASD keys, where W is mapped to jump, and S to crouch. You switch weapons with Q, reload with R, activate killstreaks with e and use the mouse to aim and shoot.

The game displays the game modes for each stage that you can enter. This includes the number of kills to win the game and the difficulty. You may eventually need to replay stages to earn enough experience to level up your characters. The main issue here is that each character levels up individually, which means that you need to replay much of the game when you switch to a new level 1 character.

Besides playing the campaign, you can also play challenges or join a quick match. Challenges start with a hard difficulty that suggests player levels of at least 21. This basically means that you should not start challenges before you have played through the campaign at least once and have a character ready that is at that minimum level.

Strike Force Heroes is a well designed game that is fun to play, at least for a while. The game lacks variety after a while, and if you are not a die-hard gamer, you probably won't play the game all the way through the final campaign level. Still, for a game or two, it is fun and enjoyable.