I have been playing Diablo 3 since it came out, and while it is a good game, it is not a game that impressed me like the original two parts of the series did. Instead of spending all my spare time leveling up my characters and tinkering with stats and skills, I noticed that it bored me more than I'd wanted to admit in first place.

Monsters' Den Chronicles is a browser based dungeon crawler that shares the hunt for loot with the Diablo series. You assemble a party of four, made up of the usual suspects such as warriors, sorcerers, clerics and rogues, select a difficulty level and penalty for dieing before you are thrown into the dungeon. 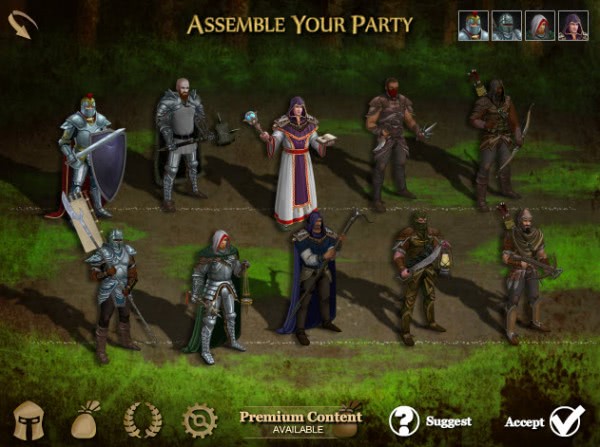 Here you need to orientate yourself before you start your exploration, as the game is not as intuitive to play as you may have hoped for. Probably the biggest issue that you will encounter during game play is that the game packs a lot of items and information in the game window, which makes everything rather tiny on the screen.

You move your party of four with the mouse by clicking into adjacent rooms. Rooms that you have not yet visited are dark and light up once you have been there once. Enemy groups are highlighted in dark rooms so that you won't run into a strong group accidentally.

Next to enemies, you will also find treasure chests, treasures, shrines and of course stairs that led deeper into the dungeon. You can hover - and should - over enemy groups to get a feeling for their strength before you blindly run into them. The hovering shows you the number and type of enemies you face. Once you have decided to attack, the game switches to a turn based (basic) screen where your group has to survive and defeat the enemy group.

There is at least some strategy involved here, as you can position your units in the front or back, with clerics, wizards and rangers better of in the back, and mighty warriors in the front. You also need to remember that magic attacks can hit targets in the second row, while many regular weapon attacks can't. You do however have time to reorder your units before each battle to position them exactly the way you want them to start the battle. 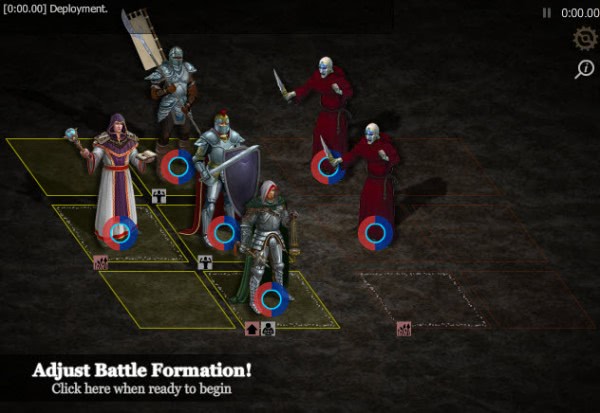 Each character has a live and power bar, and a set of skills available. Life obviously determines whether the character is still standing and fighting, or dead, while power whether skills like healing, magic missiles or power attacks can be used in a turn instead of a regular attack.

Quick units may act more often than slower units, which is something that you need to consider. If your warriors are all tanked up, you may notice that they are not that quick anymore and may only be able to act once a turn, while your nimble thief may act twice in that time.

When your characters level up, you get to select stats that you want increased and a new skill that you want them to have at their disposal. They also get full health and power, which you will come to appreciate as the only other full recovery option that the game offers are restoration shrines.

It is a fun game if you are interested in tactical role playing games. It has a few quirks, like the tiny loot symbols and the massive amount of it that you collect on each level, but other than that it offers a solid experience.