Up until now Facebook users who wanted to install a particular app or game on the social networking site had to either search for it on Facebook, or be notified about it by a friend of theirs who was already making use of the application or game.

Facebook's App Center has been designed to make it easier for users to discover new apps and games. It is not the only purpose of the marketplace though, but more about that later. Facebook users from the United States, and those who have set their local to English (US), can access the app center right away. The page is accessible via a desktop web browser and Facebook's mobile apps for iOS and Android. 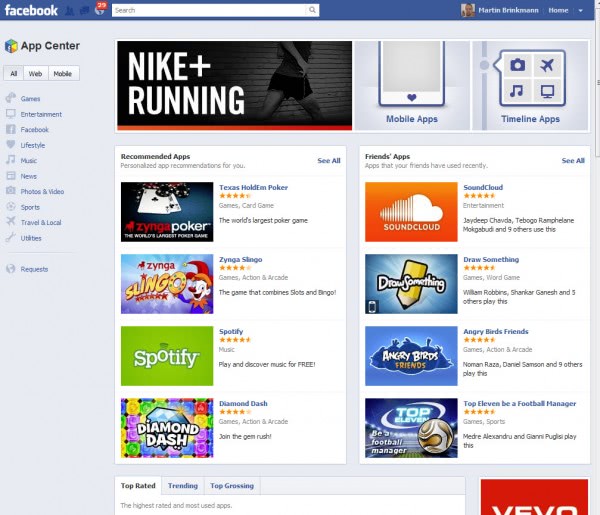 Facebook mentions that only high-quality apps will be listed in the App Center, which may be one reason that only 600 apps are currently listed here.

Users can browse apps by genre, for instance lifestyle, sports or utilities, check out recommended apps, apps that friend's have used recently, or scroll down the page to take a look at top rated, trending and top grossing apps.

The majority of apps listed in the App Center seem to be games, which is the only category right now that expands into subcategories when clicked on. You will find the usual assortment of casual games listed here, from classics like Diamond Dash, CityVille or FarmVille, to games like Glory of Rome or Solitaire Castle which are currently trending on Facebook. You can always click o the Friends' listing to see what friends have been playing in the past.

When you click on an app in the store, you get a detailed preview of it that includes a description and screenshots. Here you may see buttons at the top right of the screen that allow you to play a game right away, send the app to your mobile, or click on the visit website button to add the application to your Facebook account. The name of the last button (Visit Website) seems out of place, considering that you won't visit the website of the service at all, but a Facebook page where you can install the application after reviewing which permissions it requests.

A centralized app store or marketplace has been long overdue on Facebook. The company announced plans to highlight the new app store prominently in the future to point users of the social networking site into the right direction. For now though the marketplace is limited in what it has to offer, especially for Facebook users who have installed apps and games in the past.

I'm not entirely sure if the concentration on high quality apps and games is the right way to go forward, considering that the majority of available apps and games won't be featured in the App Center at all. This may not be a problem for users who just want to play or use what's highly popular, but if you are like me, you may want to discover new apps as well, and this does not seem to be possible at all right now.