The feature appears to be only available in select countries right now, especially administrators or managers who have not set the display language to English may not see the promote feature on the Facebook page yet. Before I explain how to display it, I'd like to walk you through the process.

When you are on the Facebook page that you are an admin of, you see the Promote button at the end each individual post next to the information how many people were reached with the post. When you click on promote you see a small overlay window on the screen where you can select a budget and currency for the promotion. 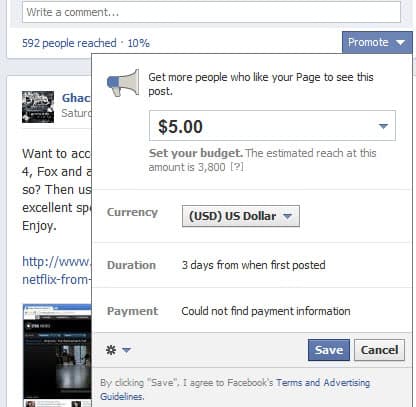 The more people you will reach, the more money you will have to pay. It starts with a budget of $5 and seems to go up to at least $20.  Payment information, including VAT and other tax related information need to be added before promotions can be run on Facebook.

Facebook users who have liked the page may then see the promoted message in their news feeds with a sponsored label attached to them.

Promotions are currently restricted in two major ways. Promotions can only be run on pages with at least 400 likes. Pages who do not have that many likes can't be promoted right now on Facebook.  The second restriction is that admins may not see the promote link if the interface language is set to a non-English language. The only way as of right now is to set the interface language to English (US) to show the promote option on the Facebook page.

This is done on the Facebook Setting's page under Language. 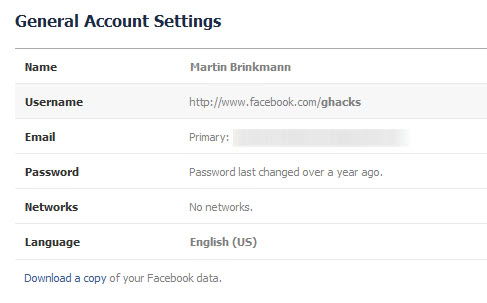 Once you have switched the language you should see the promote option under each post on the Facebook page. It is likely that this will get rolled out to non-English users in the near future.

Depending on a page's audience, the promote feature may have a negative effect if people on Facebook get annoyed by it. This may lead to the "unliking" of pages or the blocking of page updates from the news feed.