Steven J. Vaughan-Nichols questioned whether the Mozilla Firefox web browser has a future in the web browsing market in a new commentary on ZDnet yesterday. Lets take a look at the points that he makes to better understand the argument.

He opens stating that Google Chrome is the browser that is innovating, while Mozilla is not really anymore with the Firefox web browser. He fails to produce evidence for that though. Chrome definitely has pushed other browser makers into concentrating on speed and performance of the browser, and it maybe even did introduce a minimalistic almost chromeless design. But so did other web browsers, from Firefox's extension system to Opera's tabbed browsing interface. And it is a good thing that the companies are pushing each other forward with these innovations. 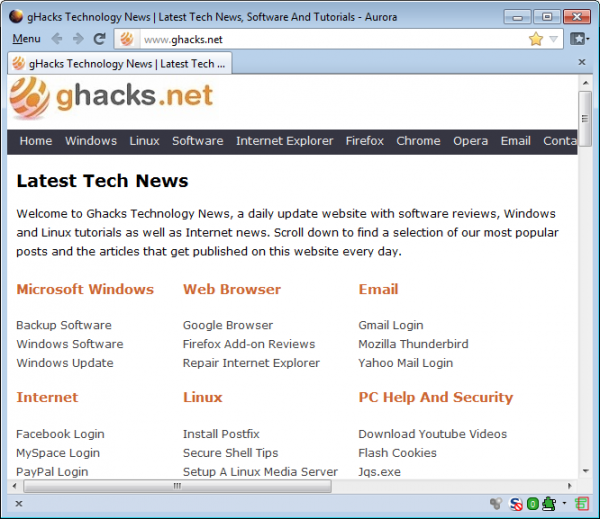 The main reason why Vaughan-Nichols might feel that way is that Firefox has been in a transitioning period from regular updates into the rapid release process. This period has not brought many changes to the most recent versions of the browser, but that is going to change in the next versions. Lets take a look

Yes, some of those features are already integrated in one browser or the other, but is that really worth criticizing? Hell, Opera Software would cry out all day long if that was the case.

Vaughan-Nichols's second observation is that Firefox crashes on almost a daily basis on various test systems that he is running the browser on. While I cannot refute that, I can say that Firefox is crashing maybe once a month on my core system, and I'm running the aurora build of the browser.

Many factors can play a role here. The systems the browser is running on, the background processes, plugins like Flash or Java, and extensions, the websites that the user opens, and activities in the browser. And Flash look-ups on some systems and not on others? That may depend on the Flash version and the sites that get accessed as much as it may be the browser's fault.

Crashes are a issue, but they can be easily reported to Mozilla who then hopefully will take care of them. I personally would try to fix the issue locally though before I start that process. Install a different version of Flash, try to disable add-ons or install an add-on that is giving you better control over Flash contents like Flashblocker or NoScript.

The third and without doubt biggest complaint is the performance of the Firefox web browser when compared to Chrome and Internet Explorer.

Notice something? I did. Firefox didnâ€™t win a single performance or standardization benchmark. Itâ€™s been nice Firefox, but enough is enough. Looking ahead I see the big browsers as being Chrome and IE. Firefox? Itâ€™s dropping back in with Opera, Safari, and other interesting, but not especially popular Web browsers.

Firefox is not scoring as well as Chrome in artificial benchmarks. Now that's a valid point (that's sarcasm by the way).Firefox is slower than theÂ  Chrome browser in those benchmarks, sure. Does it mean it is also slower on real Internet sites? Maybe. But are those differences visible to the user? Can you really say that a browser was faster by, lets say 200ms?

The article basically describes a user's own personal experience with the browser. The points the author makes may be valid for him personally, but concluding that this must be the case for everyone is a rather weak argument.Â  The article feels biased, straight from the summary which states that Firefox 11 is "not very fast" and "really unstable" all the way down to the conclusion that Firefox will be "canceled from the line-up of must use web browsers" if things continue this way.

If you look at the comments below the article on ZDnet, you will notice that a lot of users share this criticism. What's your take?