Sometimes you may stumble upon links or websites that you want to share with someone else. Maybe a rick roll for your online friends, maybe a new photo gallery for your family, or a work related link that you want other employees or your boss to know about.

Most users who want to share links open up their email program to copy and paste the link, add some text and send it to one or multiple recipients.

Others may use instant messengers to distribute the link, or post it publicly on Facebook, Twitter, Google Plus or one of the thousand other social networking sites in existence.

Firefox Share has been designed to give users a tool at hand to share links faster. The new Mozilla Labs add-on places an icon into the Firefox address bar upon installation.

Update: Mozilla has integrated the Share functionality natively in Firefox. The add-on has been removed as a consequence. You can use the "Share This Page" icon that is part of all recent versions of the browser to share a page directly using it. If you don't see the icon, the same as used by the add-on by the way,  then you can drag it to one of the toolbars using the browser's customization mode. To enter it, right-click on a toolbar and select customize from the context menu.

This share implementation supports additional services such as Delicious or Tumblr.Update End

A click on the icon shares the web page address.

Each service needs to be authorized first before they can be used to share links. A click on the sign in button opens a popup window where this is done. 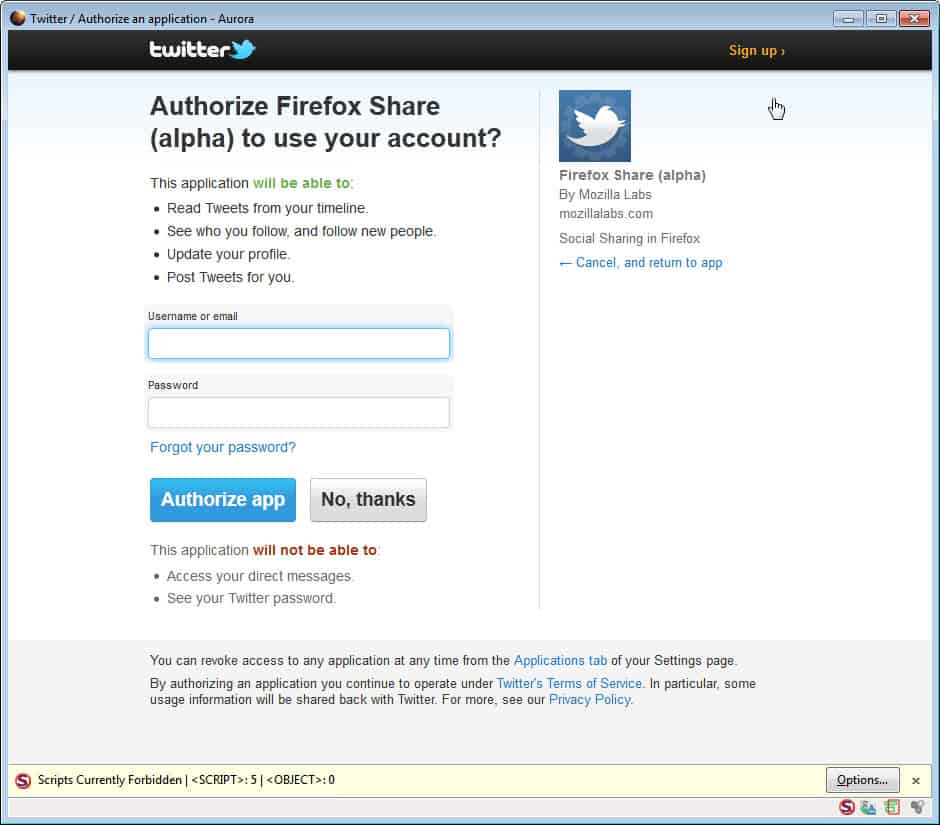 The authorized service window displays the sharing options then on future uses. Tabs that have been open before the initial authorization need to be reloaded before they can be shared.

The share overlay displays the user account and the web url in a form by default. It is possible to add text and even modify the web address before hitting the share button. Depending on the service, it is furthermore possible to change the message recipients (for instance from public to direct message on Twitter).

The announcement over at the Mozilla Labs website describes the add-on as a "descendant of F1", Mozilla's social add-on (you can read about Mozilla F1 here). Plans are to make it different from F1, for instance by adding many different providers to future versions of the extension.

Probably the best feature from a user perspective is that Firefox now communicates directly with the service providers and not through a Mozilla proxy. If you are a Firefox users you can download Firefox Share from the official Mozilla add-on repository. (via)

no rating based on 0 votes
Software Name
Firefox Share
Advertisement