Remember Command & Conquer Renegade? The CnC spin-off that turned the Command & Conquer universe into a first and third person shooter? The game received an average rating of 75% according to Metacritic, a solid but not good rating. The single player mode was heavily criticized for being cramped and scripted.

Renegade X was an Unreal Tournament 3 mod that ported the game's multi-player mode on the Unreal Engine. The mod received praises all over the board, and received the best released mod and best multi-player mod awards in 2009.

The developers of the mod since then have been working on a standalone version of the game. A few days ago, they have released a single player campaign for the game which will be part of the full game that is released in the near future.

Renegade X: Black Dawn is a free tactical first person shooter with RTS elements that is playing in the Command & Conquer universe. Much of what the original game was about has been ported into Black Dawn, including the ability to use vehicles and loads of different weapons in the game. 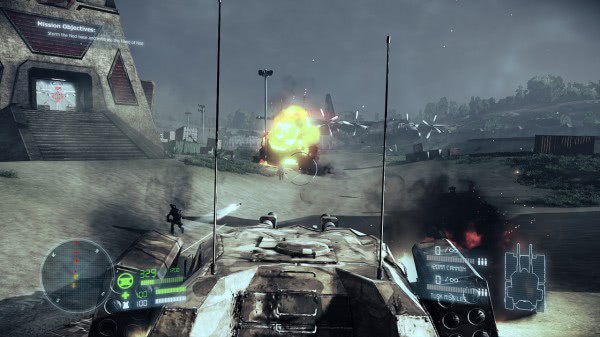 The player's objective in Black Dawn is to infiltrate the NOD base and recover scientists, including the leading Tiberium research specialist Dr. Ignatio Mobius, who are held hostage by NOD forces.

The game takes you by the hand during the first minutes of game play. You control your character with WASD, fire and aim with the mouse, and use other keys like R for reload and E for interacting with the environment. You can use a weapon's scope with a right-click which increases accuracy noticeably.

The mouse sensitivity was set to high in the beginning, and the monitor resolution to low. Those settings, and a lot of others, can be changed in the options, but only before the game has started. There is no option to change the settings during game play, which means that you need to leave the game to change them.

Once you are in the game you are feeling like a tiny wheel in a big campaign. Your GID forces are storming the beach while NOD forces are trying to prevent that. You start with three weapons, an assault rifle, a sniper rifle and a pistol, which you can swap with weapons that enemies drop.

Graphics are pretty good for a free game as you can see on the screenshots, or even better, in the following video. The game features custom cinematics, of which you will see some at the start of the game, and some during the campaign.

The campaign is relatively short. Experienced players should finish it in less than 2 hours on normal difficulty. It is still worth the download, especially if you are interested in the Command & Conquer universe or like to play first and third person shooters. All in all an impressive game that makes you hunger for the multi-player part of the game.

The latest version of the game can be downloaded from the official game website.