Dig-N-Rig has a few similarities to the smash hit Terraria that has been available on Steam for some time now. It is not a clone though, and since it is free, I thought it would be a good idea to review it on today's Game Saturday.

The game is a 2D mining simulation that puts the player in control of a mining robot whose task it is to reach the center of the earth.

In order to do that, minerals need to be farmed and invested into upgrades.

The game plays in a window on the desktop (Windows only), and starts with a short tutorial that introduces all game key concepts. Depending on the resolution of your screen, you may find the written instructions hard to read. Here are the basics:

You control the mining robot with the WASD keys, Space and the mouse. The WASD key move the robot and dig at the same time, whereas space makes the robot jump up in the air. You also need to switch between dig tools, for instance the stone and dirt dig tool. The dirt dig tool cannot dig through stone, while the stone digger can.

Minerals need to be collected with the vacuum-machine that you use with a tap on the v-key. If you do not use it, you won't be able to use any of the minerals and as a consequence be unable to buy any of the essential upgrades for deep mining adventures.

You furthermore can - and need to - use rigs throughout the game, for instance to cross over a large cave. 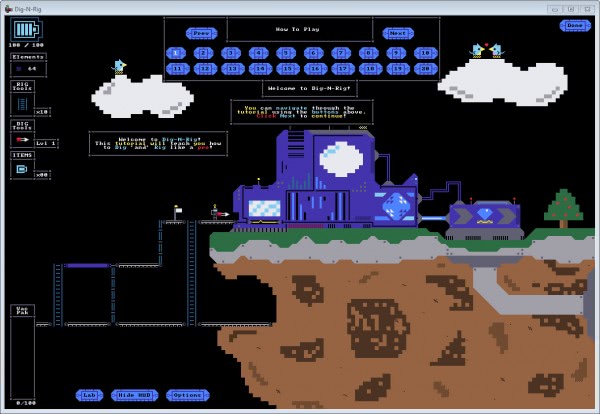 Sometimes you need to buy upgrades or special equipment before you can head further down to the center of the earth. Equipment ranges from better drills to dynamite and batteries. These are needed the farther down you go. You will encounter creatures eventually as well.

Dig-N-Rig is a nice game that should keep you entertained for some time. Especially the digging, collecting and upgrading cycle has been nicely implemented into the game. The game can be downloaded from the Digipen University website.