And now for something completely different: Remember Guitar Hero and all of those music games that came out on various gaming systems? They were super popular thanks for a while. Super Crazy Guitar Maniac Deluxe 4 is like those games, only without the instruments.

Once you have selected the song the game screen loads. You see the four guitar strings at the top, an animated stick figure at the bottom, and some stats that tell you how well - or bad - you perform the song. 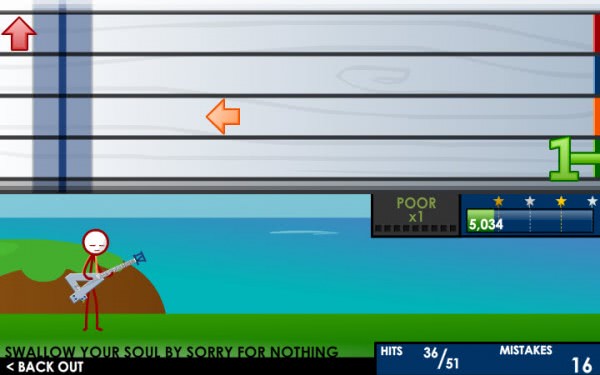 The aim of the game is to hit the keys on the keyboard when they arrive in the black bar area on the left of the screen. The game uses the cursor keys (up, down, left, right), plus the 1-4 keys. Keys appear on the right side and you have about a second or two before they reach the area where you need to press them.

This works well on the amateur levels. The pro levels on the other hand add more keys to each song which increases the difficulty significantly.

Music tracks are great, especially if you like rock and related genres. Bands are all unknown - to me at least - but that does not make the songs less enjoyable. Most are in fact quite pleasing to the ear. Each song links to the artists website which allows you to check on the albums or songs they have released, tours and other news related to the band or artist.

The game has a few aces up its sleeve, including a boss mode where you need to defeat the boss by not only tapping on the right keys at the same time, but also on other keys to hit the boss in that time as well. 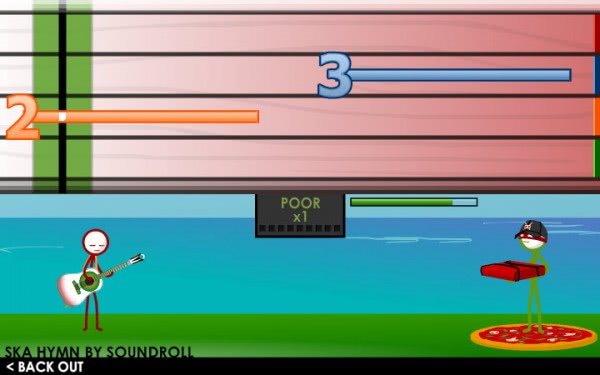 Super Crazy Guitar Maniac Deluxe 4 is a nice game if you are into rock music and games like Guitar Hero. I suggest you check it out over at Armorgames.