If you have followed uTorrent's development closely in past weeks you have probably asked yourself if the developers would ever stop releasing release candidate versions of uTorrent 3.1. The developers went through ten release candidate builds before they released the final version of uTorrent 3.1 yesterday. Another update was rushed on the same day to fix a crash that slipped into that final version.

Users of previous versions of uTorrent can check for the update under Help > Check for Updates. The update check should return that uTorrent 3.1 stable is available. A click on yes in the notification window will trigger the download and installation of the new version on the system.

The homepage does list the new paid service uTorrent Plus prominently which we have reviewed previously here on Ghacks. It appears as if the release of uTorrent 3.1 has also triggered the release of the new service.

So what's new in the latest version of uTorrent? The release notes lists three new major features and a handful of changes and bug fixes.

Among the new features are a built-in media player and a new device node to transfer content to connected devices such as mobile phones or gaming systems. Both features seem to be limited uTorrent Plus features. If you recall, uTorrent Plus adds a HD Media Player and converter option to the P2P software.

Fixes and changes mostly affect the program's stability and performance.

The new client displays an ad for the uTorrent Plus service that can be hidden with a right-click and the selection to hide the advertisement. Some users have voiced concern over the addition of features that related directly to uTorrent Plus and not so much to the client's original purpose.

These users have selected uTorrent because its lightweight, fast and stable. The addition of new program modules could seriously dampen the program's reputation in this regard. 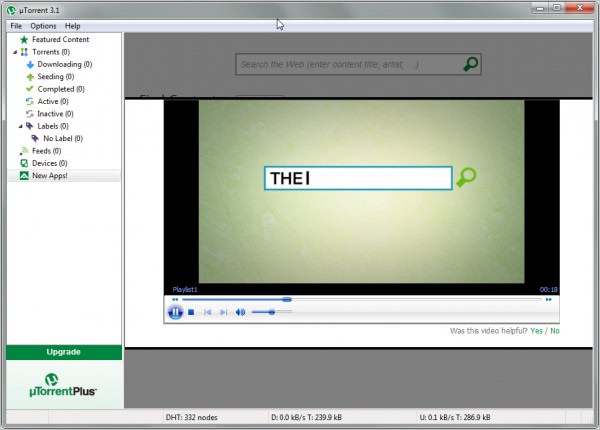 What's your take on uTorrent's latest version and uTorrent Plus?