How to Get an iPad or iPhone out of Recovery Mode

iOS devices are a wonder. This article is being typed on one right now. Sometimes, however, these robust and snappy little things go â€œboink.â€ One of the more common issues a user will perhaps encounter is when the iOS device (iPad, iTouch, iPhone) gets stuck in recovery mode. If you are reading this article, you may be experiencing an iOS recovery mode lockout or you may be in a recovery mode loop. This is the perfect opportunity for you to check out these pointers on how to return to normal functioning from recovery mode. Hereâ€™s the fix:

Recovery mode is indicated by appearance of iTunes and USB icons on the screen of the iOS device. By whatever cause, and there can be a few, the device is unable to access its operating system. So, it displays these icons to prompt the user to recover the operating system. Usually this is no big deal.

Whichever machine you use for syncing the device to iTunes, make sure its version of iTunes is the most current. Ensure that all iTunes updates are installed. If you are in doubt, launch the Apple Software Update manager. Once it checks with Apple's servers and is certain that iTunes does not need an update, you should be ready to get started.

Completely power-down the iOS device. This is done by holding the home button (front, center-bottom, in default portrait mode) AND the sleep button (corner, top edge opposite the home button) at the same time until the power-off slider appears. Use the slider to completely shutdown the device.

Before connecting the iOS device to the computer, hold the home button in place. This lets the firmware know you are about to do more than the usual sync. Once iTunes recognizes the device, which can take one-to-several seconds, depending on the speed of your computer, it will prompt you to restore the device. If you have a backup from your last sync of the device, you will be given an option to use this during the syncing process. This is most likely the option you will want. iTunes should prompt you to select which backup you want to use as your source. Make your choice and the restore may take between five and ten minutes to complete from that point. 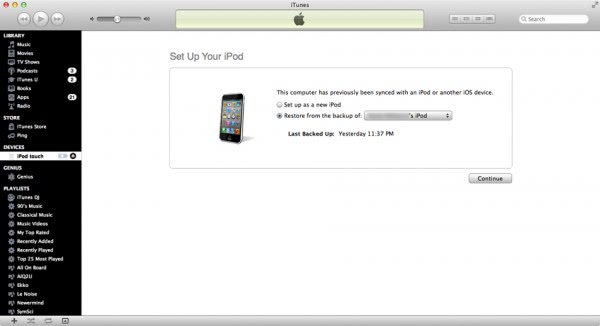 If you happen to have the sudden urge for a clean configuration, set up as a new iOS device. iTunes will return your device to factory-default setup. Even iOS can get relatively cluttered â€“ apps, notes, photos, music, etc. While generally organized very well according to the native management scheme of the system itself, sometimes a device can seem less pleasant to operate after heavy use. Starting fresh from factory defaults not only allows you to clear up some of the unnecessary stuff your system accumulates, but lets you to start out with the level of understanding you now possess, with your current usage patterns, and to re-encounter the system with a different set of eyes than you had when you first started using it. Experience is a great thing. Experience combined with a lean setup is even better than that.

Note: In iOS 5 or later, restoring the device wirelessly is an option with or without a cable connection to a computer, provided the device is functioning properly prior to starting the restore process. There are a lot of improvements in iOS 5 that allow for updates, restores and other functions to be managed without requiring use of another computer with iTunes. This guide is intended for circumstances when the iOS device has locked into recovery mode and cannot access a wireless connection or the device itself is running an earlier version of iOS.

iOS was designed to be one of the least fussy, most responsive operating systems around. It was also designed to be stable and secure. A lot of people dislike the absence of a visible file system on the largest of that family of devices, the iPad. This is a simplification over other navigation models and it is beneficial in that it prevents the user from accidentally doing something to the file system which might result in device instability. While it shouldn't be necessary to be an expert to use most devices, it is a good idea to learn some of the little tricks available to you. Although many people still find technology to be intimidating, the more you learn, the more fun tech can be for you.