If you ask Windows users which temporary file cleaning program they use then the chance is high that you get CCleaner as the answer. The popular tool has not lost any of its appeal ever since it was first introduced by its parent company Piriform (I first reviewed the program in 2005).

But CCleaner is nowhere near as complete as it could be. This has for instance been shown by CCleaner Enhancer, a program that adds more than 200 different cleaning rule sets to CCleaner.

Windows users looking for a CCleaner alternative have several programs at their disposal. I reviewed some of them, like System Ninja or Clear Prog in the past here on Ghacks Technology News.

Wipe 2011 is another CCleaner alternative. The program concentrates more on privacy and tracking orientated traces on the system and even identifies data that CCleaner does not find by default. 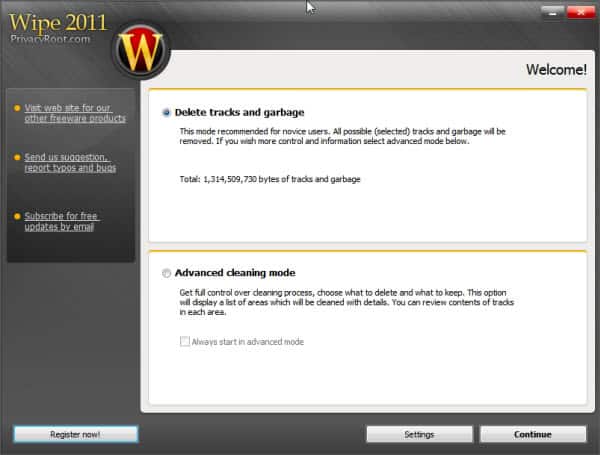 Users who want more control over the process should switch to the Advanced cleaning mode option which displays the programs findings in list form with options to prevent the cleaning of specific data points on the PC system.

The advanced listing displays all of its findings in table form. listed are the type of data search, the files and Registry entries found and the total amount of disk space in bytes occupied by the data. 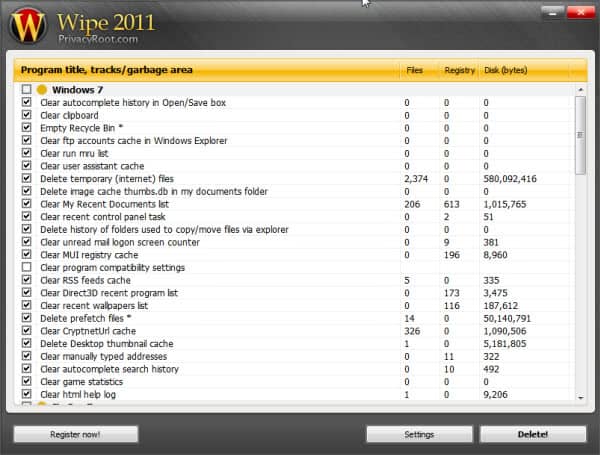 Checkboxes are provided to enable or disable groups or individual titles from the cleanup.

A right-click on any title in the Wipe 2011 software opens a context menu with options to view all contents of a particular location in the application or to delete its contents manually.

Wipe's missing a backup and restoration option. The program can wipe data permanently from standard platter driven hard drives. Users who want that need to switch from standard deletion to anti-recovery overwrites in the program settings.

Wipe 2011 is a handy CCleaner alternative with a focus on privacy and tracking related data. Windows users can download the program from the developer website. The application is compatible with 32-bit and 64-bit editions of the Microsoft Windows operating system.