It has been a while since I last mentioned Google+ here on Ghacks. Mike published a story yesterday about a Google employee who accidentally posted a rant about the Google+ product online, and the day before about a third party analysis that came to the conclusion that traffic was dropping on the social networking site.

Google despite the bad press recently has pushed out a new Google Plus update that introduced two new features to the site.

Hashtags, known from Twitter, are now supported by Google+. A hashtag is basically the symbol # followed by a keyword. Twitter uses these for categorization and search, and the same principle has been ported by the Google engineers to Google+.

Hashtags are automatically turned into links in posts that link to the keywords search results on Google Plus. 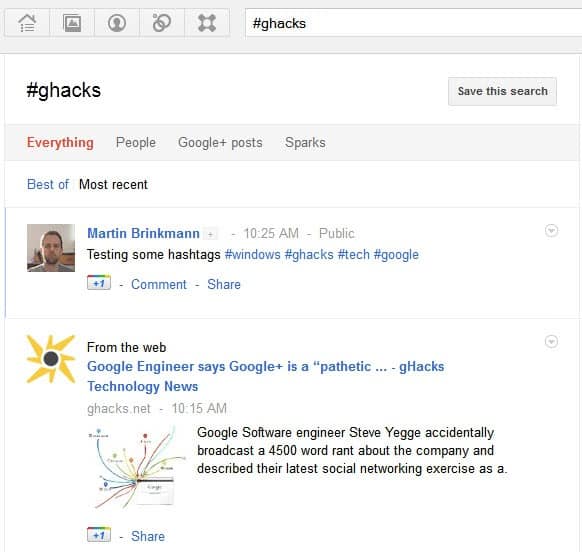 It is used both for categorizing and searching on the site. Hashtags are completely optional, and even if you do not use hashtags your posts may appear in hashtag search results.

The second new feature is real-time search which is now available on Google Plus as well.

Real-time search will tell you during searches if new posts are available. If you click on the message or select the "most recent" button (instead of the default best of button) you will notice that new posts will appear automatically on top.

Google displays a Pause button then to give users an option to pause the auto-updating which can be helpful for very busy topics.

Real-time search can be handy during events like press conferences where news are posted continuously.

Here is a video showing Vic Gundotra demonstrating both new features on Google Plus.

Hashtags and real-time search, what's your take on this two new features of Google+?

Martin Brinkmann is a journalist from Germany who founded Ghacks Technology News Back in 2005. He is passionate about all things tech and knows the Internet and computers like the back of his hand. You can follow Martin on Facebook or Twitter
View all posts by Martin Brinkmann →
Previous Post: « Google Engineer says Google+ is a "pathetic afterthought"
Next Post: MapsGL Adds Turbo Speed To Google Maps »