The start up time of the Firefox web browser ranges from almost instant to half a minute or even more on some systems. This disparity stems from different hardware configurations, installed add-ons, session restore and other Firefox configuration settings.

Add-ons for example can increase the start up of Firefox significantly. Firefox loads slower as well if many tabs need to be restored from the last browsing session.

Firefox Preloader is a new add-on for the web browser that promises faster load times on Windows environments. Setup is a little bit complicated, as it involves the creation of a program shortcut, adding a command line parameter to that shortcut and adding the new shortcut to the Windows autostart.

Here is how this is done in detail:

Start with the installation of the Firefox Preloader add-on at the official Mozilla Firefox add-on repository. Once you have done that you can close the browser.

Right-click the firefox.exe file and select Create Shortcut. You may need to create the shortcut on the desktop.

Right-click the shortcut and select Properties from the context menu.

Locate the Target field and append the command line argument -preloader at the end. 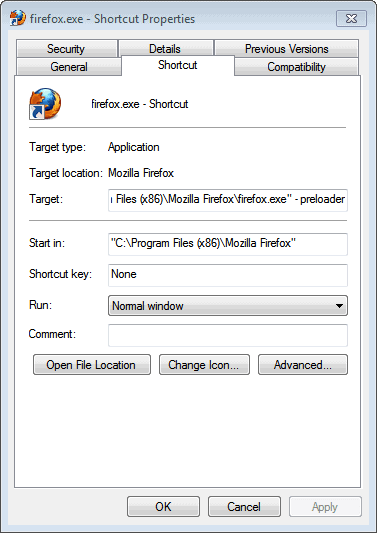 Click OK to save the changes. All that is left to do now is to add the Firefox Preloader to the Windows Autostart. This can be done by dragging and dropping the shortcut to the Startup folder of the Start Menu. You can alternatively open the folder C:\Users\username\AppData\Roaming\Microsoft\Windows\Start Menu\Programs\Startup and move or drag the file in there.

The program preloads Firefox during system startup. This means that the system start will take a bit longer, and that the start of the browser on the system will be faster. Some users who commented on the Mozilla site stated that the add-on significantly improved the start time of the browser. One user mentioned that load times dropped from 25-30 seconds to 4-5 seconds, another that the loading time dropped from 10 seconds to 4-5 seconds.

It appears that users with lots of add-ons installed will benefit the most from the preloader.

How fast is your version of Firefox starting up? Let me know in the comments.