If you were a penguin, would not you want to be able to fly as well? That's at least what the player is up against in the sequel to last year's smash hit Learn To Fly. The game comes packed with three different game modes: story, arcade and classic. Story mode puts you against obstacles that you need to destroy on your way to glory, a snow man for instance or an iceberg. Arcade gives the player set budgets at hand to create the best flying machine possible and beat, uhm, the score. Classic finally is the standard game where you just need to fly as far as you can.

Several factors determine the penguins success. First it is the starting ramp's length and height, which has a direct impact on the speed and distance. Then there are four types of items that the player can purchase and upgrade to improve the flying vessel. Sleds that improve starting speed, gliders that improve speed in air and time in air, thrust that can give you a much needed boost in air and payload which is used to give you enough punch to destroy objects in story mode. 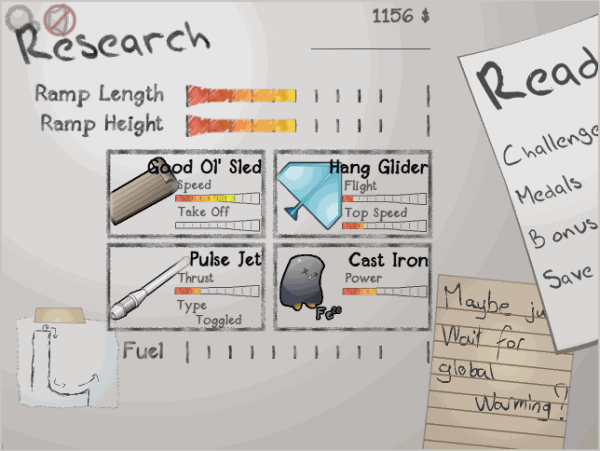 Better items get increasingly expensive. That's somewhat balanced by the fact that you get more money the longer you stay in air. Still, you often need to fly multiple rounds to earn enough money to buy the next improvement. That's kinda repetitive, especially in mid game when you earn a few hundred bucks the most but need thousands to buy the next improvements. Bonus points help a bit overcome this problem, you get them for all kinds of achievements.

There is also a bonus shop available that changes the environment a bit. You can reduce air friction here, improve air glide or earn more money per flight. You earn bonus points from completing challenges for instance. 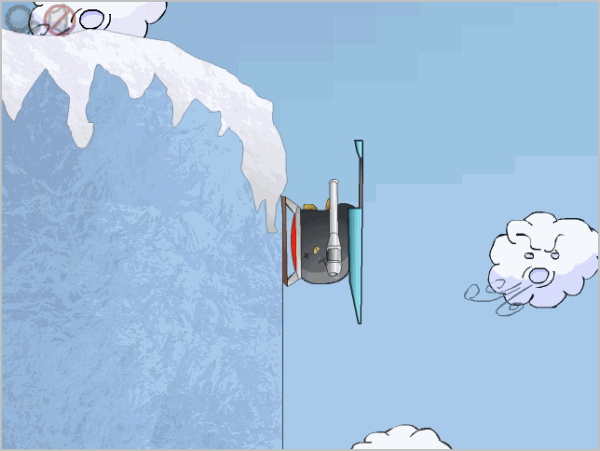 You control the game with the left and right arrow keys, a and d keys or the mouse. Space or a left mouse click uses the boost. The best way to play the game, as far as I'm concerned, is to get as high as possible after start, build up speed by diving down and building height again once you have enough speed. This way you can glide your way to greater distances that would otherwise not be in reach at all.

One thing that is irritating is the ad popup in the shop window that asks you to buy a shirt or mobile game. Players who like achievements and challenges find a lot of in the game, which could keep them busy for quite some time.

Players who are not into that kind of things will find the game to become dull over time as there is not a lot of variety in the end. All you try is to stay longer in air and beat the five obstacles if you are in story mode. That's fine for a while but may become boring eventually.

Learn To Fly 2, despite that, is a great looking flash game that has already made an impact since release. You can play the game over at Kongregate.

Martin Brinkmann is a journalist from Germany who founded Ghacks Technology News Back in 2005. He is passionate about all things tech and knows the Internet and computers like the back of his hand. You can follow Martin on Facebook or Twitter
View all posts by Martin Brinkmann →
Previous Post: « Villainous [Game Saturday]
Next Post: MC2 Burning Skies [Game Saturday] »