I love to play old school arcade shooters. Games like R-Type, Blood Money or Apydia were lots of fun to play and hard to beat. MC2 Burning Skies is a well made Flash game that brings back the charm of those classic games. It is a sequel to Mechanical Commando 2.

MC2 Burning Skies is a top down vertical shooter. You control your vessel with the WASD or cursor keys. The primary weapon is shot with the left mouse button, the secondary with space.

You begin the game with a weak ship, which you will more than once notice during the first level. Chance is, you will play that level a few times before you beat it. Whenever you beat a level or fail, you get experience points. At certain stages, you get new equipment which you can then use to make your ship more powerful. It is not only about that though.

There are five types of improvements available: Primary and secondary weapons, armor, wings and special components. 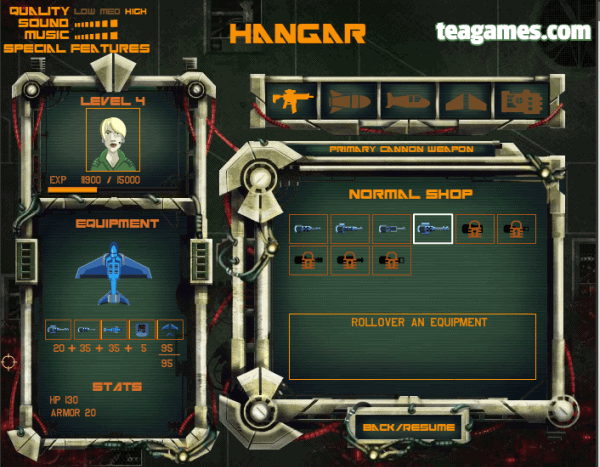 Your ship has a maximum capacity which is defined by its wings. A rule of thumb is that a slower ship can pack more weapons and equipment on board than a faster one. It is basically the same for primary and secondary weapons. For armor, it is all about capacity.

The special components can improve experience, reduce capacity requirements or enable a hard core more where you get 50% more XP but die if one shot hits your ship.

The missions include the usual activities. Waves of different types of enemies that shoot at you, bigger vessels and bosses at the very end. You can hold down the left mouse button and space to shoot all the time, faster than you could possibly click. The secondary fire has a power bar, if it goes down completely you cannot fire the gun anymore and need to cool it of for a second or so before you can continue your firing spree. 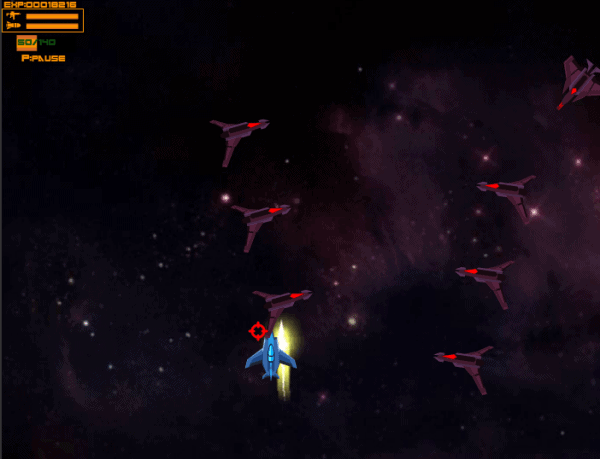 The shoot em up game gets considerably easier once you get your first batch of new equipments. Better primary and secondary weapons help you out a lot, especially in the beginning.

Some enemies drop experience points and bonuses that you need to collect. You may get faster movement, a smartbomb or a power boost for your secondary weapon.

MC2 Burning Skies is not an easy game, but it is still a lot easier than most games that I have played on the C-64, Commodore Amiga, SNES or Sega Genesis.

Still, the game is well done with a little story line and solid presentations. I suggest you give it a try, and maybe you will get that "one more level" feeling when you play it, just as I did.