Semper Driver Backup is a free driver backup software for Microsoft Windows devices to back up and restore system drivers.

Microsoft has improved driver support in the Windows operating system a lot over the years. Most users do not need to install a single driver when they setup the new operating system as most configurations work out of the box.

Drivers are mostly needed to add functionality and performance, for instance in the case of video card drivers. There are however situations where drivers are needed to install devices properly. This is often the case for old hardware, and hardware that comes preinstalled on a computer.

A backup of those drivers can be a safeguard in case of computer problems, for example when everything needs to be formatted and newly installed. A driver backup before the process ensures that you can restore the drivers afterward.

This is especially important if manufacturer-specific drivers were installed that you cannot find on the Internet. 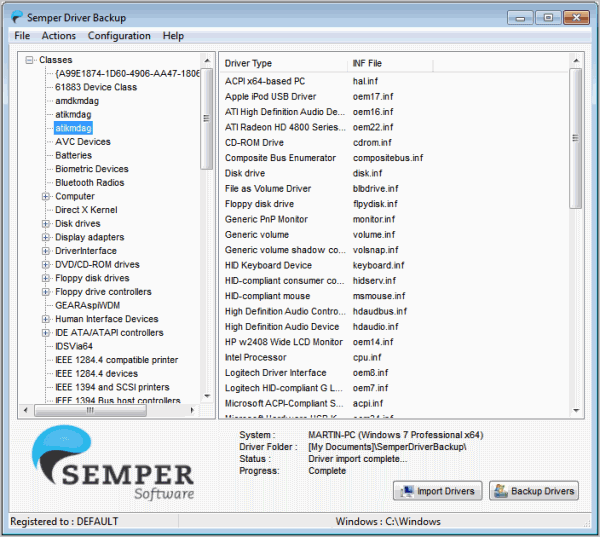 Semper Driver Backup is a free backup software for the Windows operating system. It runs the backup on all system devices and components unlike standard driver backup programs which only look on the Windows partition. That's good on the one hand as it makes sure that everything gets backed up, not so good on the other hand for keeping an overview and managing the device backups.

The drivers are backed up with a click on the backup drivers button in the program interface. The software displays a list of drivers and their inf files in the interface.

One of the biggest issues of this technique is that it does not seem possible to restore a single driver from within the application interface. If you click the Import Drivers button all drivers that have been backed up before will be restored.

While that's convenient if the hardware of the system has not changed, it could be problematic if hardware has been replaced or added.

Drivers are on the other hand placed in a folder under My Documents. Some are stored with inf files that can theoretically be used to install the drivers, provided that it is possible to identify the correct inf file of a device which may not be as easy as it sounds with more than 200 driver files backed up and cryptic names like netrasa.inf or nettun.inf. It is however possible to use the information displayed by Semper Driver Backup to link files to drivers.

It is not difficulty to use, provided that all you want to do is to backup all system drivers or restore them.

Update: The developer homepage of the application is no longer available. We have uploaded the latest working version of the software to our own server. You can download Sember Driver Backup with a click on the following link: Semper_Driver_Backup_Install_12215.zip

Martin Brinkmann is a journalist from Germany who founded Ghacks Technology News Back in 2005. He is passionate about all things tech and knows the Internet and computers like the back of his hand. You can follow Martin on Facebook or Twitter
View all posts by Martin Brinkmann →
Previous Post: « Concenturio, Freeware Alarm Reminder
Next Post: PsychoFolder, Rule Based Folder Monitor »