Firefox 4.0.1 Has Been Released

Mozilla is currently distributing an update for the Firefox 4 browser to worldwide mirror servers to be prepared for the update rush once the updating notification appear in the web browser and on the official project homepage.

For now, no sign of the update is visible on the homepage or in form of notifications in the web browser. Only the official ftp server is already carrying versions for all supported languages and operating systems.

The beta release notes classify Firefox 4.0.1 as a security and stability release. Bugzilla lists a total of 53 bugs that have been fixed in the latest Firefox release. Of those, 12 have received a severity rating of critical, another 9 one of major.

The majority of critical issues have been crash and freeze related, only two address other issues. Other notable fixes include a issue where Adobe pdf documents with a size larger than 5 Megabytes could not be loaded in the browser, problems with the address bar and other text edits after loading pdf documents using Adobe Reader X and the inability to refine searches on Yahoo answers. 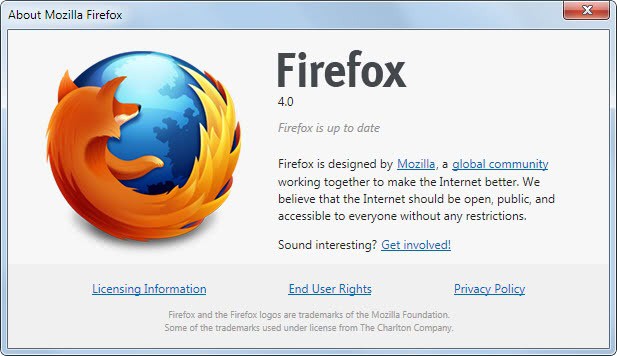 It can take up to 24 hours before the release is officially announced on the homepage and via the browser's built-in updating functionality. It is likely that download portals such as Softpedia or Major Geeks will be faster and offer the download on their sites before the official announcement.

Since it is a security release it is important to update the web browser as soon as possible. A good starting point is the list of official Mozilla Release Mirrors which often provide access to downloads for all languages and operating systems before the final release announcement on the Mozilla Firefox website. The release notes are accessible here.

All Firefox 4.0 users are asked to update the browser to the new 4.0.1 version as soon as possible to protect it from attacks targeting the vulnerabilities.