Usenet traffic has increased from 5 Terabytes per day in January 2009 to almost 9 Terabytes of traffic per day two years later. The statistics have been collected by Giganews, one of the world's largest Usenet providers.

Especially the last six month have seen an incredible growth by almost 50% in daily traffic. This increase in traffic, along with the increased retention of data, has made huge investments into new hardware necessary. It is not only the networking infrastructure that required new hardware but also the storage infrastructure to store the additional data that is getting uploaded to the Usenet every day. 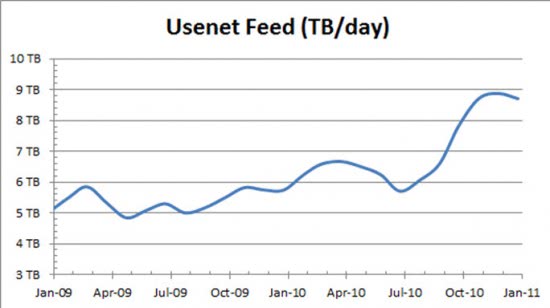 Giganews for instance offered a binary data retention of 240 days two years ago, and of 100 days in February 2007. Today the company announced a retention of 900 days which is more than three times the original retention. The actual investments in new hardware needed to go beyond that figure to accommodate the daily traffic increase.

Want to find out more about the Usenet? Check out our guides Newsgroups, the ultimate P2P alternative, List of Usenet Indexing Websites and The best Usenet Search Engines.

What are the advantages and disadvantages of the Usenet?

Giganews is currently offering 14-day trials and adds 50% off of the first month of Diamond accounts to that for new customers. Diamond accounts get a VPN free of charge with their account which for instance can be used by people from outside the United States to access US-only services such as Pandora or Hulu.