File defragmentation is not that much of a concern anymore on my PC system because the two main hard drives are Solid State Drives which do not need defragmentation. Still, the 2 Terabyte data drive is a conventional hard drive and I run a defragmentation job on it every now and then.

Windows users have lots of choices when it comes to defragmentation software. We have covered a lot of tools in the past, to name a few: Defraggler, FragExt, Auslogics Disk Defrag, MyFrag or Ultra Defrag. Not to mention the first party Windows defragmentation program that ships withe very copy of Windows.

WinContig is another free file defragmentation tool. The portable software can be started directly without installation. Files and folders can be added to the defragmentation queue by clicking on the Add button at the top. Folders includes partitions on the system. A click on the Analyze button scans the selected folders and files, and displays a fragmentation report in the end. 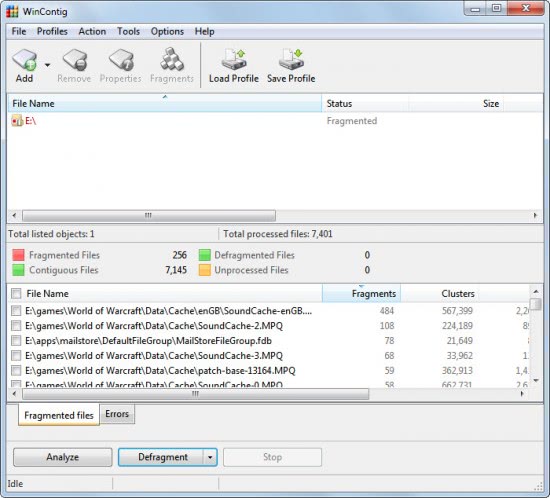 It is possible to select only specific items or all fragmented items for defragmentation. A click on Defragment opens a new prompt. Wincontig recommends to run a check disk and disk cleanup before running the defragmentation. The actual defragmentation process can take some time, depending on the fragmentation of the files on the disk.

WinContig is compatible with 32-bit and 64-bit versions and editions of the Microsoft Windows operating system. Interested users can download the latest version directly from the developer website.