Facebook Photo Zoom is an extension for the Google Chrome web browser that makes it a lot easier to view larger versions of photos posted on Facebook.

Even better, it does so without changing the way you look at photos, as you do not have to click on anything for that.

Photo zoom is immediately active after you have installed the extension in the Chrome web browser. Hovering the mouse over any photo on Facebook will display a larger version - if available - next to it on the same page.

It is still possible to click through to visit the linked page on Facebook or view an entire photo album though, which means that all original functionality is retained. 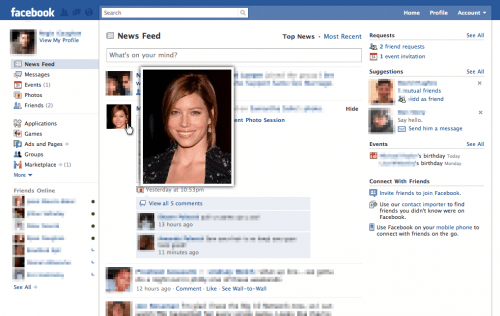 The Chrome extension can be temporarily disabled by pressing the keyboard shortcut Ctrl-Shift-Z. The same shortcut will also enable the extension again if it has been disabled before. Note that you need to enable the advanced settings before the shortcut becomes available.

The most recent version of the extension for Chrome offers several advanced features that you can make use of. Next to the shortcut mentioned before, it is possible to configure delays here. One delay defines the time the mouse needs to hover over an image on Facebook before its larger version is displayed. The other two delays define the fade in and fade out time.

It is also possible to add two additional shortcuts to the extension. One to force the zooming when a specific key is held down even if it has been turned off using the shortcut, and the other to hide the previews if a key is held down.

Firefox users can install Facebook PhotoZoom which provides access to a similar zooming option for Firefox users. Moving the mouse over a photo on Facebook will display a larger version of the image in a tooltip.