The web browser is still lacking behind, especially in the performance field but managed to catch up or even surpass other popular web browsers in the security field.

The Web Browser Comparative Test, a test that is conducted every quarter of the year, came to the conclusion that Microsoft's Internet Explorer 8 protects the best from socially engineered malware.

Socially engineered malware is defined by the testers as a webpage link that leads directly to a malicious payload. 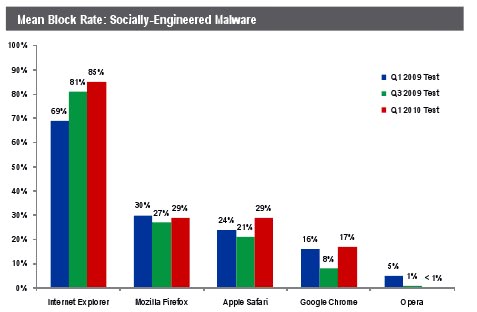 All web browsers in the test, except the Opera browser, managed to increase their effectiveness at blocking malware in the browser. Microsoft's Internet Explorer scored best by successfully stopping 85% of all threats the web browser exposed users to, followed by Firefox and Safari with 29%, Google Chrome with 17% and Opera with less than 1%.

Microsoft attributes the security increase in Internet Explorer 8 to a variety of security features including the SmartScreen Filter which is blocking more than 3 million urls per day.

The SmartScreen Filter uses a special URL Reputation Service (URS) with data centers hosted around the world and has evaluated over 250 billion URLs to help keep Internet Explorer 8 users safe! Every day, the SmartScreen Filter URS processes about 4.1 billion URLs looking for malicious websites and files; and since it was first introduced in Internet Explorer 7, the URS has processed over 5.7 trillion requests!

There have been reports in the past that Microsoft sponsored the studies conducted by NSS Labs. According to a post dating back to last year the company approached all browser developers and only Microsoft Research agreed to the sponsoring so that the study could be created.

Update: The study is no longer available on the NSS Labs website. We have removed the link to it as a consequence,