Prism Hud is a free system monitor for Windows devices that displays information about the system's load and other hardware information in its interface.

The Windows operating system monitors several computer parameters and events using the event monitor. Users who prefer a direct visual indication of the system resources that are used can install third party software to do that. Prism Hud is one of those system monitors that can be installed.

The program is different from most computer monitoring applications as it sits quietly in the system tray until a value climbs over set parameters. These are then shown as overlays on the Windows desktop giving the user a direct indication of processes or hardware that is operating beyond set thresholds.

The values that are monitored can be configured in the program's options which you can access by right-clicking the program's system tray icon.

The options are divided into two sections. Data is by default displayed in three panels on the desktop with options to remove panels from being displayed and moving so called prisms between them. Prisms are the indicators that the program displays when values reach certain thresholds.

Available prisms include cpu use, memory, disk usage, network and processes of which all but the first are divided into further sub-prisms. The process prism is for instance further divided into cpu, memory usage, page faults and IO Kbytes prisms. 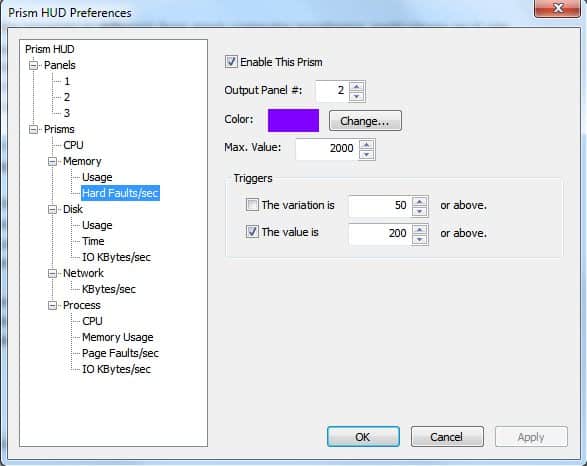 Each prism comes with its own options that can be used to configure the thresholds that trigger the display of the prisms on the computer desktop.

Each panel on the desktop can be moved around independently from each other so that all are placed in the exact locations the user wants them to be.

Prism does not use lots of system resources which is surprisingly for a program of its kind. Cpu usage never went above 2 and the memory usage stayed at a steady 7.5 Megabytes of computer memory.

Prism Hud can be downloaded from the developer's website. It is compatible with most Microsoft operating systems including Windows 7 and Windows 10.

Update: The website that Prism Hud was available on is no longer available. The project appears dead and abandoned. We have uploaded the latest working version of Prism Hud to our own server. You can download it with a click on the following link.

Keep in mind though that we don't support the program in any way. Click on the following link to download the Windows software: PrismSetup.zip